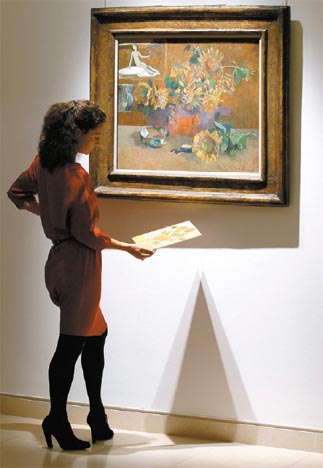 A Christie’s employee looks at a painting by Paul Gauguin called “Nature Morte a L’Esperance” at Christie’s in London, Friday, Jan. 7. The painting, which goes up for auction in The Impressionist and Modern Art Sale on Feb. 9, is expected to fetch 7-10 million pounds. [AP/YONHAP]

LONDON - Christie’s is offering art worth 74-109 million pounds ($114-168 million) at its first big auction of 2011, including a still life by Paul Gauguin that was a tribute to his friend and fellow pioneer Vincent van Gogh.

Art market records tumbled in 2010 despite concerns about the strength of the broader economy, and estimates for the Impressionist and modern art evening auction on Feb. 9 are the second-highest on record for an equivalent sale at Christie’s in London.

“2010 was a landmark year for the art market that witnessed record sales and results,” said Giovanna Bertazzoni, head of Impressionist and modern art at Christie’s, London.

“This was driven in a significant way by the demand for rare and market-fresh works of Impressionist and modern art, which represented seven of the top 10 prices paid last year at auction, six of which sold for over $50 million.

“The category continues to engage new collectors from both established and emerging markets, including China and Russia.”

The top lot on the night was expected to be Gauguin’s “Nature Morte a L’Esperance,” painted in 1901 and one of four paintings of sunflowers by the artist that year.

It was shown at Gauguin’s 1906 retrospective and at more than 20 major museum exhibitions since, although it has not been seen in public since 1989.

The sale also includes four works from the collection of the Art Institute of Chicago, led by “Nature Morte a la guitar (rideaux rouge)” by Georges Braque expected to fetch 3.5-5.5 million pounds.

The main sale is expected to raise 55-81 million pounds, with a further 19-28 million coming from Surreal works being offered on the same evening. They include paintings by Rene Magritte and Salvador Dali.

A series of day sales of lesser works on Feb. 10 has a presale value of 15-22 million pounds.