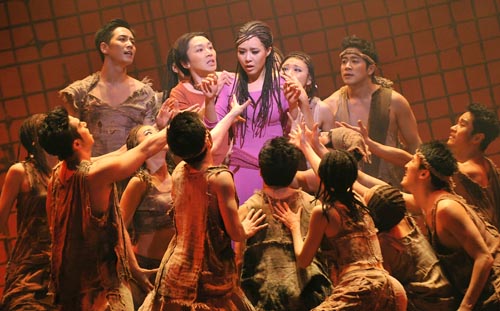 Above is a scene from the musical “Aida,” which is being performed at the Seongnam Arts Center Opera House after a five-year absence from Korea. The role of Aida is played by Ock Joo-hyun, a former member of girl group Fin.K.L. See THEATER, below. [NEWSIS]

To Saturday: The legendary 72-year-old guitarist, known in Korea as the godfather of rock, finishes off his month of concerts through this Saturday. He chose Daehangno Small Theater because it was where he performed in 1960 at the height of his career.

Blige, who has won nine Grammy Awards and four American Music Awards, will sing some of her greatest hits, including “Family Affair,” a song that became extremely popular in Korea after it was featured in a cell-phone television commercial. The set list also includes “Be Without You” and “I Am.”

This concert includes songs from the soundtrack for Takeshi Kitano’s film “Kikujiro” (1999).

He will be accompanied by the Korean Symphony Orchestra.

Jan. 20: Start the new year by listening to the Vienna Strauss Festival Orchestra conducted by Willy Buchler. The orchestra was founded by Johann Strauss specialist Peter Guth 30 years ago and is known for its authentic interpretations of Strauss’ music. The program includes “Die Fledermaus,” “Champagner Polka” and “Russischer Marsch,” Op. 426.

Jan. 28: Korea’s first generation of jazz musicians will perform together following their appearance last month in the documentary “Bravo! Jazz Life” by Nam Mu-sung. The film documents the musicians’ struggle to do what they love - play music. The movie culminates in a concert organized by a group of younger jazz musicians showcasing the talents of their elders.

Songs from the documentary will be performed at the Jan. 28 concert, including “Mo’better Blues,” “Whisper Not” and “Moonglow.”

THE SONG OF THE MERMAID

Jan. 21 to 23: “The Song of the Mermaid,” celebrating its 10th anniversary this year, was created by Kim Sun-hee, the founder of the Kim Sun-hee Ballet Company and a professor of dance at Korea National University of Arts.

This performance features all the ballerinas who previously performed in the leading role.

To Jan. 30: The legendary story of the three musketeers, Athos, Porthos and Aramis, returns to Korea, following sold-out houses the last time it was presented here.

To March 27: “Aida” returns to Korea after a five-year absence. The story of Ethiopian princess Aida is one of forbidden love. Aida is captured and sold into slavery in Egypt, where Egyptian military commander Radames falls in love with her. As the military commander of Egypt, Radames is forbidden to love a woman from a different country and he struggles to choose between her and his service to the Pharaoh. To make matters worse, the Pharaoh’s daughter, Amneris, is in love with him. Will Radames chose love or success?

Jekyll and Hyde is set in London in 1885. Henry Jekyll is a doctor and scientist who lives with his sick father and decides to devote his life to finding a cure for his mental illness. When he decides to experiment on himself, he starts to form his frightening other half - Hyde.

Today to Sunday: The folk story “Geomgosori,” written by Moon Sook-hyun, originated during the Three Kingdoms period and will be told this week with the accompaniment of a geomungo (zither). Music is provided by the traditional music group Jeongga Akhoe.

In this concert, they will play some of their songs on bamboo instruments. There will also be opportunities for the audience to try out the instruments on stage.

To Feb. 6: Boseong, some 400 kilometers (250 miles) south of Seoul, is one of the major tea production areas in South Korea. Installations include large Christmas trees, illuminations and a tunnel of light called the “Milky Way Tunnel of Love.” These lights are set along green-tea plantation paths and offer fantastic night views.

Saturday to Jan. 31: Pyeongchang is an alpine county with an abundance of snowfall and is a haven for winter sports. Throughout January, the county holds a trout-fishing festival on a 33,000-square-meter lot situated 700 meters above sea level (2,300 feet).