Hoping for an end to the days of scandal

Hoping for an end to the days of scandal 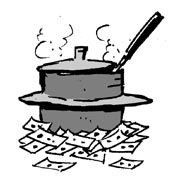 In the eighth year of King Sejong’s reign during the Joseon Dynasty (1392-1897), Defense Minister Jo Mal-saeng, together with other senior officials, was impeached by Saheonbu, the royal officer of audit and inspection, on bribery charges. They were indicted for accepting slaves as bribes in return for helping with a lawsuit between civilians over slaves, and they were exiled to remote areas.

In human history, there has never been a period that was without the problem of bribery, though the dividing line between a bribe and a present has changed from time to time. The Chinese word for bribe consists of two characters - one meaning “clamshell” and another meaning “individual.” In other words, it was goods exchanged on an individual basis. In the old days when clamshells were used as currency, bribes were exchanged as personal presents.

The military-backed governments of Chun Doo Hwan and Roh Tae-woo collected hundreds of billions of won under the pretext of “raising funds for ruling the country.” When former President Kim Young-sam was in power, corruption scandals such as the Hanbo scandal and a graft case involving the National Tax Service broke out. Before then, the recipient of a bribe had been free from responsibility and it was only the donor who was held responsible for the crime.

When former President Kim Dae-jung was in power, there were four corruption scandals - involving Lee Yong-ho, Jin Seung-hyeon, Yoon Tae-sik and Choi Gyu-seon. Since then, the main players in graft scandals have gone from running big-businesslike bribe operations to running ones more comparable to small and medium enterprises.

That was followed by “Park Yeon-cha gate” under the Roh Moo-hyun administration. In that scandal, the positions of the recipient and donor changed because the donor used a list of bribe recipients to pressure them into staying silent. The bribe amounts were smaller in comparison to the astronomically large bribes of the past, while the recipient list got much longer, because they had to keep covering their tracks.

There have been so many scandals it is hard to keep track. But when will the days of scandal come to an end?