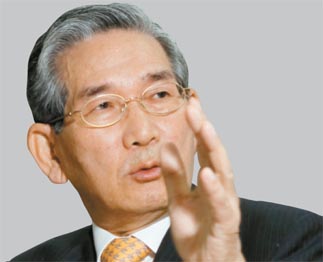 Korea’s first privately run prison, Somang Prison, opened its doors last month in Yeoju, Gyeonggi. It took years of effort by Kim Seung-kyu, the former head of the National Intelligence Service under the Roh Moo-hyun administration, to get the place up and running.

Aside from his career as a former senior government official under a progressive administration, Kim is now an elder at a Protestant church in Bundang, Gyeonggi, and head of Agape, a Protestant missionary group which founded Somang Prison. JoongAng Sunday talked to Kim last month at his office in the Logos law firm in Samseong-dong, southern Seoul, where he is a senior advisor.


Q. How do you spend your days after retiring from your position as head of the NIS?

A. I’ve been busy trying to open this private, Christian prison. Although the related bill allowing the prison to open passed in 1999, we had a difficult time raising funding and persuading some of the residents in Yeoju, who were opposed to the idea. In the end, however, the Yeoju government, as well as the residents, understood the basic aim of opening this particular prison.

I heard that you have taken part in trying to establish this prison for a long time.

Back in December 1995, the members of the Christian Council of Korea decided to build a private prison. At the time, I was reading “Born Again” (1976), which was written by Charles Colson, the former Special Counsel to Richard Nixon, and thought about how I could lower Korea’s conviction rate.

In 1998, I submitted a petition to president Kim Dae-jung to allow a private prison to open. He responded by saying he was able to see just how serious the situation in the nation’s prisons were after spending some time in one and that he thought a Christian group would be eligible to run a private prison. So in December 1999, the National Assembly passed the bill to allow such a prison to open.

Somang Prison opened on December 1. How many inmates are there now?

There are about 30 inmates. The maximum number of inmates we can take is 368. By February, we expect we will be able to fill the prison with about half that number. Five hundred people have already applied to Somang Prison.

Why is a religious group running this prison?

Prisons can be divided into two categories - privately run and state run. Among privately run prisons, there are profit-based and nonprofit institutions. These private, profit-based prisons are built in order to lessen the financial burden on governments. Somang Prison is a private, non profit prison, in which its key goal is to reform inmates.

Isn’t the basic aim for all prisons to reform inmates?

As you probably know, these days the word reform in prisons has become almost obsolete. Prisons are becoming more of a “school” for inmates, in which they learn new techniques to commit crimes. If you look at the statistics, you can see that second conviction rates for Korea’s ex-convicts is higher than 50 percent on average.

So are you saying that Somang Prison can help reduce this rate?

Our ultimate goal is to lower the second conviction rate among our inmates to less than 4 percent, so we can become role models for other prisons.

But just because it is a private prison, it doesn’t mean that the conviction rate will automatically go down.

We are currently running various programs that try to change the character of our inmates on a more fundamental level, so they can come out of the vicious cycle they are in. There are more than 600 volunteers at Somang Prison, mentoring the inmates one-on-one. For a minimum of one hour each week, these volunteers listen to each inmate’s story and counsel them. The volunteers have been trained in a professional counseling program for more than six years. Before Somang Prison took on this program, it was test run at a state-run prison in Yeoju. The program was a massive success, with the second conviction rate there falling to 6 percent.

I heard you looked at prisons abroad before opening Somang Prison.

Yes. We looked at two prisons - the second unit of Jester Prison in the United States and the Humaita Prison in Brazil. Both of these prisons are run by Christian groups and are nonprofit. The rate for second convictions in the U.S. is 70 percent and in Brazil, it is 75 percent. But the rate in these prisons is 6 and 4 percent, respectively.

Are you purposely accepting only inmates that have been convicted with lighter crimes?

That is something that only people who do not correctly understand the role of religion say. Private prisons can achieve things that normal, state-run prisons can’t. Also, religion has the power to change people and we aim to fundamentally change inmates’ mindsets. Countries spend a lot to take care of these inmates and we are trying to reduce this and make a healthy society. It doesn’t matter that we are a Christian group. Any religious group can do the same. We are just trying to do something good for the sake of the country and society.

Do you have any plans to get back into politics?

I like my life as it is now, as a free man. I want to live the rest of my life making every effort to help others. I haven’t thought of getting back into politics.

What are your political leanings? You were after all, a part of former president Roh Moo-hyun’s progressive administration.

I don’t really have anything to do with progressive politics in my opinion. Rather than having the same ideas, it was more like I was called in. One day President Roh called me to have a meal at the Blue House. I didn’t know a lot about him back then. He questioned me for two hours and asked if I wanted to become a government minister. I told him I didn’t want to be a minister.

President Roh said that he never saw a person that said he didn’t want to be a minister when asked. I think he liked that about me.