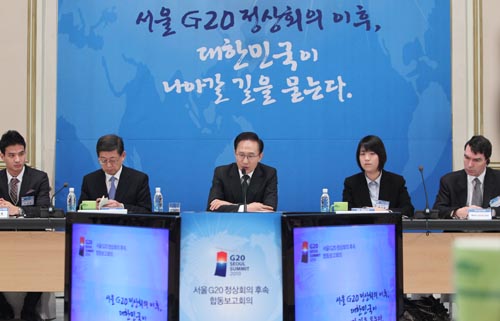 
President Lee Myung-bak said yesterday that Korea is still at the starting line when it comes to playing the role of global leader and responsible, mature democracy.

Lee urged the country to look one or two decades forward and to create policies that would prove this role Korea gained as host of the G-20 Summit.

“What Korea was before the G-20 and what it is after should clearly be different,” Lee said. “With the G-20 Summit over, I think it is just the beginning for Korea.”

The remarks were made yesterday at a follow-up meeting to the G-20 Summit, which was held in November. Yesterday’s meeting was aimed at discussing policy direction after the summit and had originally been planned for Nov. 25, but was postponed when North Korea attacked Yeonpyeong Island on Nov. 23.

Lee said the G-20 Summit was a success and he expressed appreciation to foreign countries and the Korean people for their help. Lee added that Korea needs to look forward despite facing some unfavorable conditions.

“Korea is the only divided nation in the world and the world’s most belligerent forces are at our bedside,” Lee said, referring to North Korea. “We have to pursue economic growth while spending heavily on defense.”

He also stressed the important of education.

“We have no natural resources,” Lee said. “If there are [any], it is only human resources.”

Representatives of several government agencies attended the meeting and suggested new policy directions, such as fostering an open environment and offering more international aid to developing countries. Foreign ambassadors were among the 260 attendees.

The Presidential Council for Future and Vision said the government needs to pursue free trade agreements with more countries and must adopt policies to better embrace foreigners and realize its vision of a multicultural society.

The Presidential Council on Nation Branding stressed the importance of expanding the country’s financial contributions to the international community and increasing the number of Korean volunteers overseas.