Resort for Yongsan folk cost a lot, is barely used

Resort for Yongsan folk cost a lot, is barely used 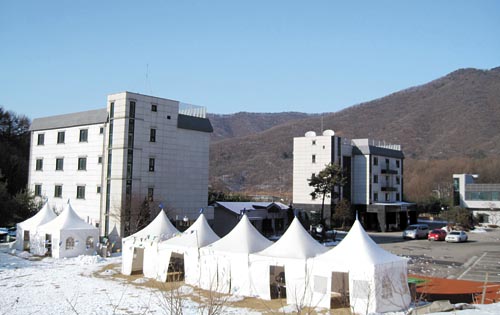 The getaway for Yongsan residents in Yangju, Gyeonggi. By Han Eun-hwa


The mayor of Seoul’s Yongsan District, Sung Chang-hyun, said yesterday that he may ask the Seoul Metropolitan Government or the Board of Audit and Inspection to investigate a resort in Yangju, Gyeonggi, that was bought by the district council in 2009 on suspicions of improper dealings.

The resort was supposed to provide inexpensive getaways for Yongsan residents, though many hadn’t known it was available. The council bought a motel from Yun Mae-geun, a Yongsan city councilor from 1998 to 2006, and transformed it into a resort.

The JoongAng Ilbo reported Monday that the Yongsan District Office paid higher than market prices for 7,802 square meters (83,980 square feet) of land and a motel in December 2009. 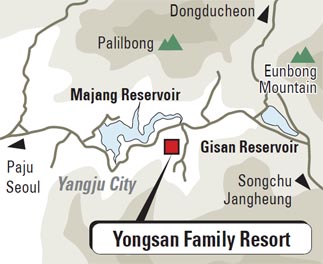 Yun bought the land in 2003 and completed construction of four buildings for the motel in 2004. But business was poor, local residents said.

“I couldn’t understand why the council approved buying the resort,” said Mayor Sung, who took office last July. “I will check the past accounts on the transaction.”

In a phone interview with the JoongAng Ilbo on Monday, Yun denied he benefited from the sale of his motel.

“I spent 5.2 billion won buying the land and building the motel,” Yun said. “I sold them at a huge loss as well. I don’t want to talk about this matter anymore.”

The former Yongsan mayor, Park Jang-gyu, said Monday, “Before I took office as mayor, I promoted myself at election campaigns by saying I would build a resort if I took office. After I became mayor, I looked around at other land but couldn’t find any cheap sites, leading me to choose Yun’s.”

In Yangju, residents were perplexed by the purchase.

“There are no well-known tourist spots in this city,” a 64-year-old Yangju resident named Jeong said, “so I can’t understand why the district bought a family resort here.” Yangju is known for having many love motels.

“When the Yongsan District Office said it would take over Yun’s motel and land, people whispered that the district was flush with money,” a restaurant owner in Yangju surnamed Park said.

Gang Nam-seok, director of the Civil Support Division at the Yongsan District Office, said 60 to 80 percent of the resort’s rooms are filled on weekends, and most of the rooms are vacant on weekdays.

Yongsan resident Son Ri-na, 28, said she didn’t realize a resort was available for her and her neighbors. “I don’t know whether it was built for local people,” she said, “or for holidays for officers at the district office.”

Yongsan District renovated its office last year, spending 159 billion won, with 36.2 billion coming from the Seoul Metropolitan Government and central government. Much of the grandiose structure is empty because tenants are unwilling to pay the rent set by the district, and it has been dubbed a “ghost building.”

The district office announced Jan. 5 that the council passed a bill last month to build a second resort for Yongsan residents on Jeju Island, which will cost 4.8 billion won.

“It is a waste of money to build a new resort, just three months after completing construction of the Yangju Family Resort,” Seol Hye-yeong, a district councilor, said.