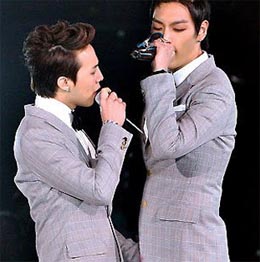 G-Dragon and T.O.P. of Big Bang will perform “Knock Out,” the fourth single from their album “GD&TOP,” today for the first time on television.

The duo released the first single from their album in the summer. G-Dragon and T.O.P. will perform the fourth single on “M Countdown,” cable network MNet’s music ranking program.

The second single, “High High,” hit to No. 1 on “M Countdown” on Dec. 30, just a week after its release. The song also scored well on network television, topping the Jan. 7 singles list on SBS’s music ranking program, “Popular Music.”

“We have been doing very well with the songs ‘High High’ and ‘Oh Yeah!,’” G-Dragon said Tuesday in an interview with local daily ISPlus during a break from filming a new music video. “We hope ‘Knock Out’ will be widely loved as well.”