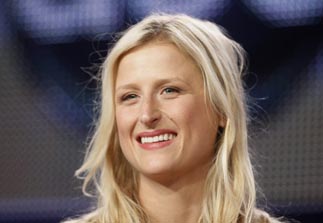 Mamie Gummer, the 27-year-old daughter of Meryl Streep, will star in a new ABC series called “Off the Map.”[Reuters]

LOS ANGELES - It must be tough being the daughter of a living film legend - especially when acting is your own chosen profession.

Just ask Mamie Gummer, the 27 year-old daughter of Meryl Streep, who is about to make her most-high profile appearance yet as one of the stars of “Off the Map,” a new ABC television show.

Asked on Monday what advice her double Oscar-winning mother has given her so far, Gummer shot back with an answer worthy of Streep’s caustic fashion-diva character in the hit comedy movie “The Devil Wears Prada.”

“We don’t really talk shop at home,” the actress told television journalists. “It’s not like we own a line of pizza joints, and there is a secret ingredient.”

Gummer, one of Streep’s four children with her sculptor husband Don Gummer, said that despite studying theater at college, her decision to take up acting professionally was far from automatic.

“I was hyper-aware of the ramifications that decision would hold. It was a long process,” she said.

Streep, 61, the star of movies ranging from the musical “Mamma Mia!” to dramas “Doubt” and “Out of Africa,” won Oscars for “Sophie’s Choice” and “Kramer vs. Kramer,” and she is considered among the world’s finest living actresses.

Gummer made her Broadway debut in a 2008 revival of “Les Liaisons Dangereuses.” She has appeared in the television lawyer series “The Good Wife” and HBO’s historical mini-series “John Adams.”

In “Off the Map,” she plays Mina Minard - one of six doctors who are running away from personal problems by going to work in a tiny clinic in a fictional South American jungle.

The series, a cross between “Lost” and “Grey’s Anatomy” that is filmed entirely in Hawaii, makes its debut on the ABC television network on Wednesday.

Gummer said she took the television role because of “the opportunity it afforded me to live with a character for a long time. Hawaii wasn’t a bad draw, and I am a big fan of ‘Grey’s Anatomy’ and I knew the quality of the work would be good.”

Bans and Rhimes described the new series as a comedy-drama with a strong action element that takes doctors out of city-based scenarios seen in other popular medical television shows.