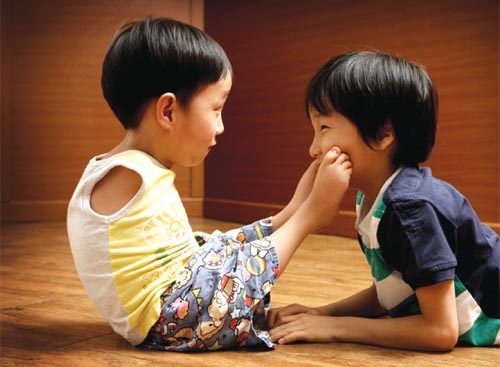 Yu Tae-ho, left, was born with no arms and short legs. His story sparked an outpouring of support for orphanages from across the country. Provided by MBC


High school freshman Kim Han-seul was on her way to meet a friend when she spotted a toddler perched on the ledge of a two-story building. As a group of bystanders watched in disbelief, Kim, without thinking, leapt onto a nearby fence, scaled the building and rescued the toddler.

The act of heroism changed her life. Presents poured in from just about everywhere. She was awarded scholarships, given handwritten letters, and offered free tteokbokki (spicy rice cake) coupons from a street stall near her school.

At a time when communities seem to be lacking heros, the story became a national sensation when it broke last Oct. 30. Koreans, it seems, have become more detached than ever from what happens in their communities, leading to a lack of leadership and individual initiative.

Last year, an elementary school girl was blindfolded and dragged by a middle-aged man 600 meters (0.4 miles) down a street in broad daylight in Yeongdeungpo District, Seoul.

Not one person called the police, and the school girl was raped by the man.

In November last year, a man believed to be intoxicated passed out on a two-lane road in Gunsan, North Jeolla. He was run over by 16 passing cars until one driver pulled over and called 119.

Experts call this the “bystander effect” - people assume someone else will take care of a problem, when, in fact, no one does. 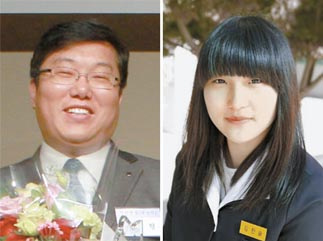 “If a person is in need of help and there are a lot of people around, everyone assumes somebody else will take care of it,” said Kwak Keum-ju, a psychology professor at Seoul National University. “People have a hard time taking the lead in this kind of situation. But it becomes a different story after one person starts.

“What Korea needs is one courageous person,” Kwak added.

The Korea JoongAng Daily sought out some underappreciated heroes and asked what inspired them to act.

Kim said she acted spontaneously when she climbed to the second-story ledge in Cheonho-dong, eastern Seoul, to rescue the baby. “I climbed up the wall, grabbed the toddler, jumped down and made a safe landing,” she said.

The baby escaped without harm, but Kim suffered minor injuries to her shoulder and wrists.

The experienced judoka joked that she might not be cut out for being a hero. “I’m feeling O.K. now, but I’ve realized it isn’t something I could do on a regular basis,” she laughed.

“The biggest change? I became friends with more of my classmates. I got closer with the friends I already had,” she said.

Kim - a fan of American crime dramas - wants to become a police officer.

A five-story building in Samseong-dong, southern Seoul, was set ablaze last November by a middle-aged man who had a grudge against his ex-wife. Disgruntled that she had broken off contact with him, the man set himself on fire in her third floor office after blocking the exits and entrances of the building.

Enter Nam Ki-hyung, 42. Seeing columns of gray smoke rise from the building across the street from his company, Nam jumped into action. “My colleague and I picked up fire extinguishers and went to put out the fire,” said Nam, a team head at Bokwang Family Mart.

When he arrived, firefighters were struggling to extinguish the blaze with water cannons as trapped office workers crowded near windows gasping for air.

“They seemed to need fresh air, so I climbed up a ladder and broke the double-paned windows with my fire extinguisher,” Nam recalled. Nam saved the lives of three people, but three perished in the blaze and 20 more were injured.

Nam was hospitalized for four days as doctors repaired torn ligaments in his fingers, but he does not regret risking his life to save others. “It just came to mind that I had to climb the ladder. I just acted on instinct.

“Since everyone around me says I’m a hero, it’s actually kind of a burden,” Nam laughed.

Hundreds of villagers on Yeonpyeong Island in the Yellow Sea evacuated from the island last Nov. 23 when it was bombarded by North Korean artillery.

After the attack, people had nowhere to go. Dozens of buildings were flattened on the island - just 8.5 kilometers (5.3 miles) from the shores of North Korea - and residents feared another barrage.

While contemplating the hardships facing the villagers, Park Jun-ho, general director of In Spa World, felt inspired to help.

“[Employees and I] discussed and decided to persuade the president [of the company] to let the islanders stay at the spa for free. The president approved the offer. We had no idea this would develop into such a big story, though,” said Park.

Up to 500 Yeonpyeong refugees stayed on the second floor of the spa - which is normally used as jjimjilbang space - for 27 days. A jjimjilbang is a Korean-style public bathhouse and spa.

The four-story establishment is located in Incheon, a two-hour boat ride from Yeonpyeong Island.

The public bathhouse turned away paying customers for its jjimjilbang for nearly a month, but in December, Ongjin County of Incheon, the administrative division that includes Yeonpyeong Island, said it would reimburse the business for accommodating the islanders.

Yu Tae-ho’s smile and determination made him a national hero last year after he was featured in a television documentary.

Born with deformed legs and no arms, he was abandoned at birth - a not uncommon tragedy here in Korea. Now 12, he lives at an orphanage in central Seoul that’s operated by a Buddhist temple.

Yu is unable to walk. He moves from one place to another by rolling his body and uses his toes as fingers. He writes, eats and dresses himself with his right toes. He also dabs lotion on his face with his toes.

MBC’s special on Yu and his friends in April brought viewers to tears and sparked an outpouring of support from across the country.

“After the documentary was aired, we received inquiries about volunteer work. They all said they were touched and inspired by Tae-ho to do something for the community, which is good for us,” said Yu Jung-hwa, an official at the Seunggawon orphanage in Anam-dong, northern Seoul.

The story also resulted in a shower of donations. Among them, Hyundai Motor Group donated a 12-seat van to the orphanage.

“After watching Tae-ho, I’ve realized I take things for granted. I felt ashamed, because I complain a lot about small things in my life,” Kwon Eun-jung wrote on the Web page of MBC. “I cried a lot, not because it was sad - but because it was beautiful to watch.”