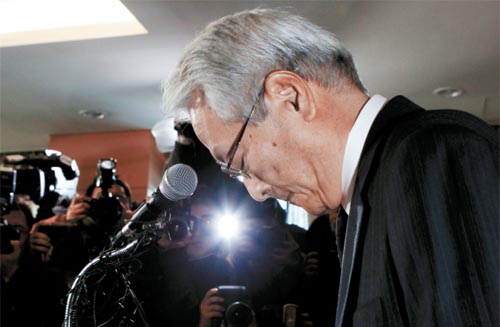 Chung Tong-gi bows to the public yesterday at a news conference in Seoul as he announces his withdrawal as nominee for chairman of the Board of Audit and Inspection, 12 days after he was picked by President Lee. By Cho Mun-gyu


Chung Tong-gi, President Lee Myung-bak’s nominee to head the Board of Audit and Inspection, threw in the towel yesterday after losing the support of the ruling party, and declared himself “free.”

“I have decided to step down as BAI chair-nominee today,” said Chung at his office in Seoul. “I would like to give my apology to the citizens, whatever the truth may be on the controversies that have arisen over my candidacy.”

Chung was gaunt as he read a bitter and angry speech he said he had prepared in the early hours of yesterday. The night before, Chung had told reporters he would “think about it for one more night.”

“I have been loyal to the duties that were given me and lived honestly to my standards,” he said. “I can proudly say that I have managed myself well through my life without doing anything worth anyone’s suspicions or criticism.

“Despite all of this, my financial assets and experiences, as well as my privacy, were distorted and trampled on because of the nomination for BAI chairman,” Chung said.

The former senior secretary to the president for civil affairs denounced allegations that he had used his influence at the Supreme Public Prosecutors’ Office to help Lee win the presidential election in 2007. He also denied involvement in a scandal over the Prime Minister’s Office’s illegal spying on private citizens critical of the Lee administration.

“I could not help but lament that these issues, these false claims, were made out to be established facts,” Chung said.

“The wages of a lawyer who has thirty years of experience will definitely be different from the income of one who has just started out,” Chung said.

He also spoke bitterly of the ruling Grand National Party’s opposition to his nomination. Earlier this week, GNP Chairman Ahn Sang-soo said Chung was “unfit” for the position, opening a chasm between the ruling party and the Blue House.

“The ruling party, which is in charge of government affairs, has urged me to resign without any inquiry or the process of verifying the truth through a confirmation hearing,” Chung said, labeling the situation “absurd.”

“Demanding a withdrawal without a confirmation hearing is the same as sentencing a man to death without a trial,” he said.

The main opposition Democratic Party had demanded the Blue House withdraw its nomination of Chung from the start.

“It was a natural result,” said Representative Jeon Hyun-heui, spokeswoman for the DP. “The root of this problem is President Lee’s flawed personnel philosophy. There should be an apology issued from the president and an investigation and questioning into the Blue House officials responsible for the reshuffle.”

“If he was going to [withdraw] this late, then it would have been better for the Blue House to retract his nomination than Chung withdrawing on his own,” said Representative Park Sun-young, spokeswoman of the Liberty Forward Party. “A person who is on his way out should be without words, and it’s a pity he has said too many.”

The GNP kept up a calm front, calling Chun’s withdrawal a “painful decision” and signaling that it wanted to mend relations with the Blue House.

“The party and the Blue House are one,” said GNP floor leader Kim Moo-sung yesterday. “The problem has come to a close with Chung’s withdrawal.”

President Lee was cited by his spokesman, Hong Sang-pyo, yesterday as saying he expressed “pity” over the withdrawal. The Blue House said it was already looking for the next nominee for the empty BAI chairman position.

Chung said he will also resign as CEO of the Korean Government Legal Service, which he has been since 2009, and “attend to his family.”