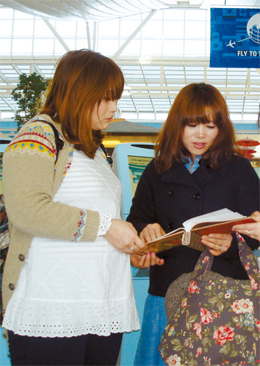 Her three daughters at Tokyo’s Haneda Airport Tuesday as two of them prepare to depart for Seoul in search of their missing mother. By Song Ji-hye

The search for Eriko Tanahashi, the Japanese widow who vanished without a trace while exploring her passion for hallyu, or the wave of Korean pop culture, reached a new level as two of her daughters flew to Korea to meet with the governor of the province in which she was last seen and a handsome actor Tanahashi adored.

Two of Tanahashi’s three daughters, the eldest Madoka and the youngest Hinato, visited Seoul Tuesday for three nights and four days, funded by MBC. MBC will shoot a documentary of the daughters’ desperate journey to find their mother or discover her fate. (The middle daughter, Chisato, stayed in Japan.)

Actor Ryu Shi-won met the daughters Tuesday right after their arrival. “I will do everything I can do as if she were my mother,” he told them, “so be positive to find her.”

Governor Lee Kwang-jae of Gangwon, where Tanahashi was last seen alive, also adjusted his schedule to meet the daughters yesterday at his office in Chuncheon. “I really feel sorry over the disappearance of a Japanese woman who was a big fan of Gangwon, a core location for Korean films and soap operas,” Lee said. “I think Gangwon has a duty to find her.”

Tanahashi, from Kanagawa Prefecture in Japan, was a fan of Korean soap operas, and when her husband died in 2005, she got fully swept up in the “Korean Wave” of cultural exports. She started studying Korean and visiting with her friends.

On Dec. 28, 2009, she arrived alone in Seoul on a trip paid for by her daughters. She was last spotted eating dinner alone in a restaurant in Jumunjin, a coastal town in Gangneung, Gangwon, on Jan. 1, 2010. Police say her case is cold and they have no idea if Tanahashi, then 58-years-old, met an accident, was murdered or voluntarily disappeared. 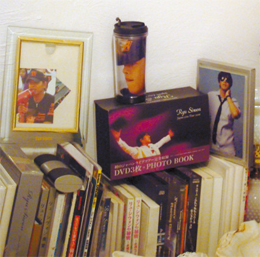 The JoongAng Ilbo visited the house of Eriko Tanahashi, the Japanese widow who vanished during a trip to Korea a year ago, and found evidence of her passion for Korean pop culture and her adoration of actor Ryu Shi-won. Tanahashi’s bedroom resembles a shrine to Ryu.

Her last known contact was when she sent photo files of Ryu to a friend in Japan from her cellphone two hours after the meal in Jumunjin.

Ryu said he met Tanahashi several times and remembered her.

According to Ryu’s spokesperson, Ryu said yesterday, “In fact, I have paid constant attention to Tanahashi’s case since she disappeared, in cooperation with the Japanese Embassy in Korea. She visited Korea quite often because she loved not only me but everything about Korea, and I can remember her clothes, hairstyle and even gestures. She is just like a mother for me.”

The JoongAng Ilbo visited Tanahashi’s house in Japan on Monday and her passion for Ryu was evident. One wall of her bedroom was a kind of shrine to the actor, with framed pictures, stacks of DVDs of his television dramas and CDs of him singing, and a plastic tumbler bearing his picture.

The daughters said Tanahashi used to go to the airport to greet Ryu whenever he visited Japan and followed him wherever he went.

“Since our father passed away, Ryu was everything to her,” the daughters said.

Ryu’s spokesperson said the actor was aware of Tanahashi’s passion, and he wrote a letter of sympathy to the daughters after she disappeared.

“I remember her cheering me at a car racing competition,” the actor said, according to the spokesperson, “and once gave me a pair of winter gloves.”

The daughters denied their mother suffered from depression, which was suggested by a witness to her final meal in Jumunjin, who said Tanahashi stared out the window at the East Sea for four hours as she ate.

“She liked looking out the window,” one of her daughters said. “She has only taken pills for insomnia before, not for depression.”

The daughters said they would visit Jumunjin today and distribute flyers with Tanahashi’s photo.

Governor Lee of Gangwon said he would release information on Tanahashi through a local newspaper and three cable television channels and urge all police stations to focus on finding her.

Lee posted a message on Twitter yesterday that read, “Tanahashi is our mother and family member.” The plea will be posted on official Web pages of government offices in the province and an online magazine of the provincial office.