National football team players participate in a practice ahead of their second Group C match against Australia in Doha, Qatar, on Tuesday. [YONHAP]


The Taegeuk Warriors face their toughest test in the group stage of the 2011 Asian Cup tonight when they take on Australia. Korea will count on its defenders and midfielders - notably Hwang Jae-won and Ki Sung-yeung - to neutralize the physical Australians.

Tonight’s match against Australia, to kick off at 10:15 p.m., will give a good indication of where Korea stands among Asia’s elite football programs.

Korea is coming off a 2-1 win over Bahrain, its first opening game victory at the Asian Cup since 1988, while Australia dominated India 4-0 in its opening match.

Twenty-sixth ranked Australia is the highest FIFA-ranked team at the Qatar Asian Cup.

A win would help Korea secure a spot in the quarterfinals as it looks to win its first Asian Cup title in 51 years.

The only change in the starting lineup will be Hwang Jae-won replacing Kwak Tae-hwi, who is unavailable for the match after being ejected in the second half against Bahrain. 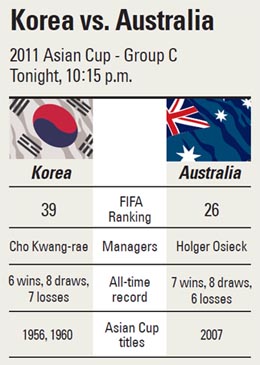 National team manager Cho Kwang-rae had considered reserves Cho Yong-hyung and Hong Jeong-ho but decided on Hwang for his stronger aerial abilities. Cho scored two goals with the Suwon Bluewings in the K-League last year - both were headers in set-pieces.

“I plan on inserting Hwang, who is good at defending against high passes, in the game against Australia,” Cho Kwang-rae told the press after a team practice early yesterday.

Listed at 186 centimeters (6 foot, 1 inch), Hwang will be expected to defend against Australia’s Tim Cahill and compete for the ball against towering defenders Sasha Ognenovski and Lucas Neil. Both are dangerous in the air in set-piece situations. Australia also relies heavily on long crosses.

If Hwang does have a weakness, it is his speed. He might struggle in one-on-one situations against Australia’s quick midfielders, such as the fleet-footed Cahill. Hwang has also yet to play together with the national team defenders in game situations.

Hwang had been considered among the finalists for the 2010 South Africa World Cup squad, but he committed several errors in a 2-0 international friendly win against Ecuador on May 16 and did not make Huh Jung-moo’s final cut. 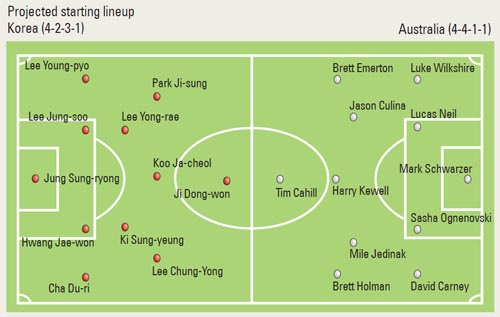 “I worked hard to make the national team, but it’s weird in that I always seemed to come up short,” said Hwang.

“In an effort to repay Cho for his faith in me, I want to contribute to a win by managing the game from the defensive position.”

Ki Sung-yeung, who will partner with Lee Yong-rae to make up the team’s defensive midfielders, will be counted on to provide the first line of defense against Australia’s attack.

“Australia is a physical team. As long as we don’t lose one-on-one battles, it will result in a positive result,” said Ki in an interview with the JoongAng Ilbo.

“Australia is a much tougher opponent so we need to prepare well. We played well against Bahrain and if we use that to our advantage, we can do well against the Aussies,” added the Celtic player.

Australia has a tendency to advance up the wings and make long centering crosses to the middle.

“My job is to initiate our attack by providing passes to our wingers and forwards, but I also need to play the first line of defense in order to lighten the load for our defenders,” stated Ki. “Australia is really strong up the wings.

“We need to focus on preventing our opponents from starting their attack up the wings.”