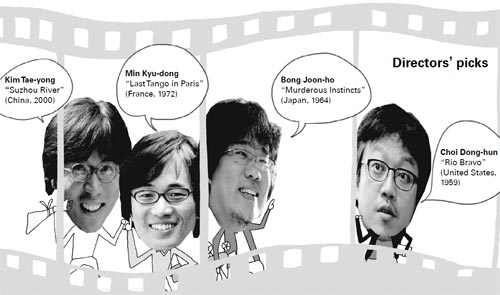 When the government cut subsidies to Cinematheque by 50 percent last year, the only nonprofit organization in the city with a theater playing classic and art-house films, found itself on the verge of shutting down.

What saved Cinematheque was a group of local cineastes - including renowned directors Lee Joon-ik, Park Chan-wook and Bong Jun-ho, and famous actors like So Ji-sub and Ko Hyun-jung. Members of the group donated their salary from appearing in commercials for a local beer brand.

Next week, they will celebrate the art house theater’s survival with the annual Cinematheque Friends Film Festival, which is now in its sixth year.

The festival, with the theme of “Jouissance Cinema,” is dedicated to the sheer joy of watching films. It runs from Jan. 18 to Feb. 27 at Seoul Art Cinema, Cinematheque’s venue in Seoul.

Lee, director of the 2005 megahit “The King and the Clown,” described Cinematheque as a home for Korean filmmakers of all stripes.

“I now make commercial films, but I think [Cinematheque] is where I really belong. And it’s pretty much the same for other directors,” he told reporters at a press conference earlier this month. “I believe that rooting for Cinematheque is one way to support Korean film. And people who don’t want to watch blockbusters or commercial films need their own home.”

In addition to providing financial support to Cinematheque, the directors, actors and industry representatives who came together to support the theater each chose a favorite film for inclusion on the festival program, which was announced at the press conference.

Lee and the other Cinematheque supporters at the press event - including directors Kim Tae-yong (“Late Autumn,” 2011), Lee Hae-young (“Festival,” 2010) and festival programmer Kim Sung-wook - said they hope the event will encourage more people to visit Seoul Art Cinema this year.

Fourteen of the 44 films in the festival were chosen by Cinematheque supporters. Their choices constitute an eclectic mix of films from Korea and abroad.

“I believe watching a tragic love story is one way to maximize the joy of watching films,” Kim said.

Director Bong Joon-ho, famous for his 2009 hit “Mother,” picked the 1964 Japanese film “Murderous Instincts,” which depicts a woman’s journey from passive to aggressive after she is raped. Director Min Kyu-dong - whose romantic comedy “Finding Mr. Destiny” is still playing at theaters nationwide - chose the 1972 French film “Last Tango in Paris.”

“Sometimes sad movies soothe your soul and they can even make us happy,” Min said in a press release.

In addition to the directors’ favorites, six films by French director Eric Rohmer (1920-2010) will be screened at the festival, along with three films featuring U.S. actor Buster Keaton, famous for his slapstick comedy.

Twelve French films, including the 1933 black-and-white film “Madame Bovary,” will be shown in another section of the festival co-curated by Cinematheque Francaise.