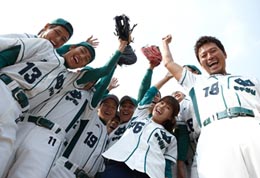 Acclaimed Korean director Kang Woo-suk’s first film based on a true story, “GLove,” tells the story of a baseball team whose members are all hearing-impaired.

Kim Sang-nam (Jung Jae-young), a hot-tempered former professional baseball player, is sent to the countryside to coach a team of hearing-impaired players in order to avoid media coverage of his recent involvement in an assault case.

At first, Kim has a difficult time imagining how he can teach baseball to a group of boys who can’t hear, but as he spends time with them he starts to believe that they can play the game.

Motivated, Kim decides to help them prepare for the nationals.

But things don’t go the way Kim plans and their difficulties communicating with one another exacerbates the situation.

Kang, who is known for action and crime thrillers such as “Silmido” (2003) and “Public Enemy” (2002), said in a recent interview that he wanted to make a film that would make him happy during the production process.

Jung won Best Actor for his performance in “Moss” (2010), which was also directed by Kang, at the 31st Blue Dragon Film Awards in November.

Directed by Tom McGrath (of “Madagascar” fame), “Megamind” is an animated film that flips some of the conventions of past superhero films - except for “Despicable Me,” which started the whole evil-turned-hero trend - with an all-star cast and never-ending action and comedy scenes similar to “The Incredibles.”

Megamind, voiced by Will Ferrell, is an evil villain who finally defeats his nemesis, Metro Man (Brad Pitt).

It took him ages, but now that Metro Man is gone, Megamind has complete dominion over Metro City. However, just as he’s getting comfortable, another threat arrives.

Titan (Jonah Hill), perhaps an even more evil mastermind than Megamind, begins to terrorize the city and the one person who can actually save the city could turn out to be the one who took it over in the beginning.

The usual DreamWorks comedy should keep the action going and the addition of Tina Fey, David Cross, Justin Theroux and Ben Stiller to the voice cast makes “Megamind” a truly star-studded affair.

Based on the novel of the same name by Daniel Woodrell and winner of numerous film awards, “Winter’s Bone” is no ordinary tale.

Ree Dolly (Jennifer Lawrence) is just 17-years-old, but she must save her family by tracking down her drug-dealer dad after he puts the family’s house up for sale to pay bail and disappears.

The film, directed by Debra Granik, takes place in the deceptively serene Ozark Mountains - trees, fog, water and all - and displays the poverty and drug problems that pervade certain parts of the American South.

“Winter’s Bone” received universal acclaim when it was released in the United States last year and Lawrence was nominated for a Best Actress Golden Globe.

The film will be released in Korea on Jan. 20. 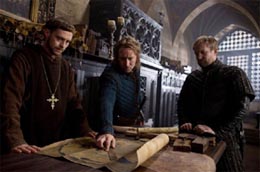 Starring Nicholas Cage, “Season of the Witch” is not worth watching.

Cage’s Behmen is a disillusioned 14th century crusader during the Dark Ages who returns home to Europe to see that their land is being ravaged by the Black Plague.

Together with another veteran of the Crusades, Felson (played by Ron Perlman from “Hellboy”), Behman must deliver an accused witch (played by Claire Foy) to a faraway monastery so she can be exorcised by a monk to end the Black Plague.

Their journey is rife with dangers and craziness: they must fight wolves and corpses, but mostly the audience has to figure out how to make of all the disjointed plot elements.

Critics in the United States have universally hated the movie.

Among their complaints: “Season of the Witch” features horrible special effects, a terrible, nonsensical plot and dialogue that manages to somehow include accents of varying geographic and temporal locations.

“Season of the Witch” was directed by Dominic Sena and will undoubtedly confirm what everyone is thinking: Why does Nicholas Cage do the things he does? After watching this film, the question will remain unanswered.