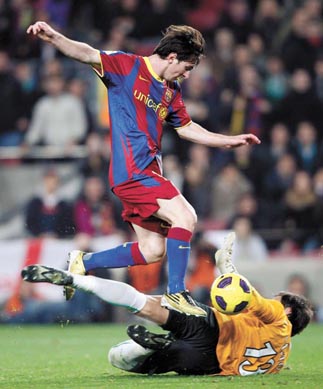 MADRID, Spain - Lionel Messi celebrated his second straight Ballon d’Or award by scoring a hat trick Wednesday in Barcelona’s 5-0 win over Real Betis in the Copa del Rey quarterfinals. Messi, who took the prize ahead of teammates Andres Iniesta and Xavi Hernandez on Monday, was honored before the first-leg match at the Camp Nou stadium. The Argentina forward then showed why he was voted world player of the year.

Barcelona finally broke through against a composed Betis side in the 44th minute, Iniesta playing Messi through in a one-on-one with goalkeeper Casto Espinosa, who was caught off his line and beaten by a lifted shot.

Espinosa and Barcelona goalkeeper Jose Manuel Pinto stood out in the first half with a number of important stops, but the Betis keeper could do little in the 64th minute.

After making a reaction save to deny Messi, the rebound fell for the forward to slide the ball under him into the goal. Messi completed his hat trick in the 73rd minute, beating the offside trap to reach Xavi’s pass before shooting past Espinosa for his 31st goal of the season in all competitions.

Espinosa was helpless in the 76th minute despite making a save from Daniel Alves, who tapped the loose ball back for Pedro Rodriguez to send into the top of the net for his 15th goal of the season.

Second-division leader Betis’ strong first-half performance - Ruben Castro forced Pinto into a diving save before hitting the crossbar - was a distant memory when substitute Seydou Keita jumped high to head home in the 83rd. minute

“In the first half, we weren’t good at all, but in the second half we played at a great level and we can say that the series is decided,’’ Xavi said.

Alves said any debate over Messi’s Ballon d’Or triumph had been comprehensively settled.

“I think today any debate over who deserved the Ballon d’Or was settled. [Messi] deserves it,’’ the Brazil international said.

Barcelona went 27 straight games without defeat during the 1973-74 season. This season’s team will be aiming to surpass that mark and notch its 13th straight league victory against Malaga this weekend.

Earlier, Alexis Ruano scored in the 88th minute as defending champion Sevilla rallied for a 3-3 draw at Villarreal in the first leg. While Villarreal coach Juan Carlos Garrido was suspended for the match, Cani was available after having a red card revoked and the midfielder opened the scoring in the 24th minute of a high-tempo game.

Cani passed to an unmarked Giuseppe Rossi in the middle but Javi Varas saved. The loose ball eventually found Cani, who volleyed into the goal with Varas scrambling to get back into position.

Rossi made it 2-0 five minutes later after the Italy striker hammered a shot from outside the area from a corner, the ball taking a deflection off Alexis to leave Varas with no chance. It was Rossi’s 17th goal in all competitions this season.

Lopez then stopped Negredo from point-blank soon after but was helpless when Romaric and Negredo combined again, Negredo heading his Ivory Coast teammate’s cross home at the far post.

Both teams had legitimate-looking goals disallowed after that - Negredo for a foul and Ruben for offside - and both picked up a number of yellow cards as the game became more physical before Alexis buried Romaric’s pass beyond the reach of Lopez and in off the post.

“The truth is we’ve made things complicated for ourselves,’’ Villarreal forward Santi Cazorla said.

Real Madrid plays Atletico Madrid and Almeria faces Deportivo La Coruna in the quarterfinals on Thursday. The second legs are next week.