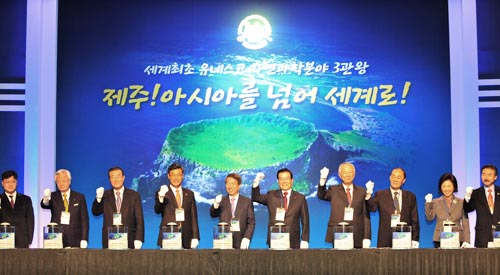 Members of the National Committee for Jeju New7Wonders of Nature announce a national campaign to rally support for the designation of Jeju as one of the world’s new seven natural wonders, a title sought by 27 other global sites such as the Grand Canyon in the United States, Germany’s Black Forest, Ha Long Bay in Vietnam and Australia’s Great Barrier Reef. A Switzerland-based nonprofit organization started the project in 2007. [YONHAP]