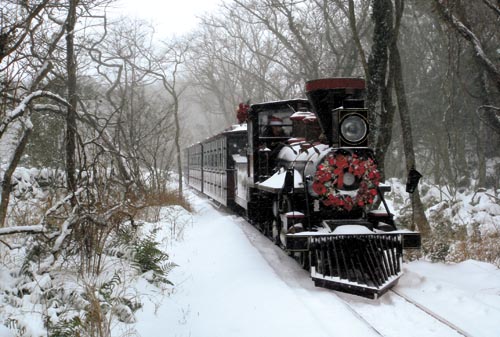 A new train on Jeju Island takes visitors around Ecoland theme park. The train lets visitors hop on and off at four stations. Provided by Ecoland

But tourists may now add a few more attractions to their list of things to do on Jeju - from an old-style train that takes you around a primeval forest on the northeastern part of the island to a yacht ride on the southwestern coast and clay pigeon shooting nearby.

There were no trains on Jeju Island until last November, when a theme park brought from Britain a miniature train modeled after the famous Baldwin line of steam trains. The train on Jeju, which actually runs on liquefied petroleum gas, not steam, was manufactured by Britain’s Severn Lamb, which also made locomotives for Hong Kong Disneyland.

The train, which has four passenger cars, operates on a railroad stretching a total of 4.5 kilometers (2.8 miles) around Ecoland, a theme park established in a unique forest known in the Jeju dialect as gotjawal, referring to a forest with a combination of rocks and thorn bushes. 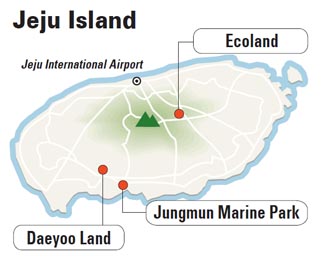 The forest is the only place on earth where both tropical and polar plants coexist - largely because of the bumpy topography created by lava from Mount Halla. The topography features aquifers that retain heat and moisture to enable various plants to grow in the area.

Although the full trip along the railroad takes around 50 minutes, visitors may hop out at four stations - where they will find an eco-bridge, lake, picnic garden and green tea and rose garden. Then they can either walk or take the next train to the next station. Trains run every 30 minutes.

A windmill that looks as though it could have come from Amsterdam stands on the side of the lake, which spans 20,000 pyeong, or 16 acres, which offers breathtaking views to inspire the photographer in you.

Those who are more adventurous can take a hovercraft out onto the lake.

The picnic garden station brings you to an extensive lawn with teddy bear topiaries and a children’s playground.

When flowers are in bloom in the spring and summer, the green tea and rose garden becomes lush and colorful, said Cho Yong-geun, head of marketing at the theme park. 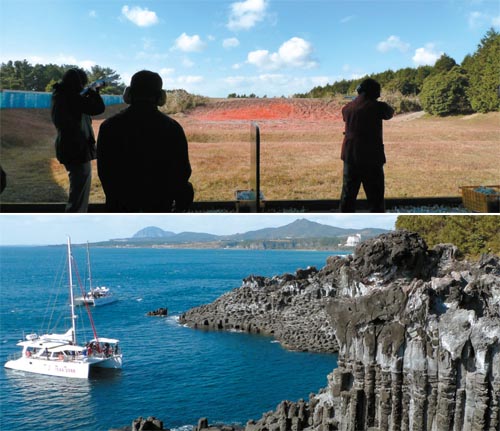 Visitors to Jeju Island can now test their aim at a shooting range that offers clay pigeon shooting or relax on a yacht that goes around the picturesque cliffs of Jusangjeolli near Jungmun Beach in Seogwipo, on the southern part of the island. By Seo Ji-eun

There are yachts on the Han River in Seoul and in some port cities such as Tongyeong but only on Jeju can you sail year-round.

“Since Mount Halla protects the ocean from the strong winds out of the northwest, the water is always smooth - even during autumn and winter,” said Heo Ok-seok, president of Jungmun Marine Park, which runs a yacht tour in the Jungmun Tourist Resort Complex.

“The best part about yachting here is that you can see the sun blaze and the snow fall at the same time,” Heo said.

“Drinking tea as a boat brings you to Jusangjeolli when it is covered with snow is just heavenly.” Jusangjeolli is a cliff along the coast with stone pillars created as a result of a lava eruption from Mount Halla. It is located near Jungmun Beach.

The yacht is not only reserved for tourists. Romantics can charter a 2 billion won ($1.8 million) boat named “Shangri-La” to propose to a lover or to even tie the knot. The yacht, which can hold up to 26 people, departs from Marina Port inside Marine Park, sails around Jusangjeolli and Jungmun Beach, and comes back into the port.

Guests who have rented the yacht for such a celebration can ask it to drop anchor for a short break or overnight. The yacht is equipped with a king-size bed, shower facility and karaoke machine. The chef can even make sushi with fresh fish from the ocean.

In addition, Marine Park has its own beauty salon, dressing room, photo studio and a full staff to help couples choose wedding garments, do hair and makeup, and take wedding photos just one or two days before the ceremony. There is also a spacious seafood buffet restaurant that can be used for receptions.

Since Jeju is a popular honeymoon destination, couples may choose to stay a few days more to celebrate, and close relatives and friends could elect to tour the island.

Heo says he came up with the idea of combining a wedding business and yachting after seeing how much Korean couples spend on weddings. “Here, you can do everything at once for just a few million won,” he said.

It’s true the majority of tourists go to Jeju to appreciate nature and relax. But those who want to rid themselves of stress through a more radical means might try clay pigeon shooting.

Daeyoo Land, about a 10-minute car ride from Jungmun Tourist Resort, offers clay pigeon shooting as well as a shooting range with M-16 rifles and various types of pistols.

The objective is to shoot an orange clay dish that is fired from beneath your feet and flies at a speed of up to 90 kilometers per hour. Each time a shot is fired, the shooter needs to reload his or her gun. The moment the clay pigeon is shattered, so is your stress.