Harsh advice may be just what is needed

Harsh advice may be just what is needed 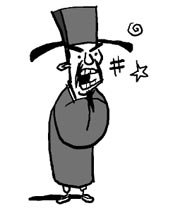 During the Spring and Autumn Period, Duke Qing of the State of Qi nearly killed a man because of an animal. When his favorite horse died, he ordered the official in charge to be executed. Minister Yan Ying, who was known for his outspoken attitude toward the duke, reproached the official. He said the first fault was that he failed to take good care of the horse and let it die, and the second fault was that he had made the ruler kill a man just because of the horse. The minister bellowed out, “If the people know about the incident, they will blame the ruler, so you should understand how grave your crime is!” Since the reproach was actually directed at the duke himself, he changed his mind.

Just like Duke Qing, Emperor Taizong of Tang nearly made the same mistake when he was outraged by the death of his favorite horse. And it was Empress Wendeshunsheng who dissuaded the emperor. She told the emperor he should not forget Duke Qing. It was not the only time the empress dissuaded the emperor from unnecessarily killing. Chancellor Wei Zheng always expressed his honest and often critical opinion to the emperor, and his advice often displeased Taizong. One day, the emperor said he would kill the old man if Wei Zheng insulted him one more time. Then, Empress Wendeshunsheng bowed and said, “When a king is bright, his ministers are honest. Wei Zheng is an honest minister; that means you are bright.” Emperor Taizong then trusted Zheng.

Duke Qing led the State of Qi into the second golden age, and Taizong accomplished the Reign of Zhenguan. The ministers gave straight advice to the rulers, and the rulers listened. The combination led to prosperity.

Even when bitter advice is the obvious remedy for a crisis, it is not easy to embrace it. The Yongzheng Emperor, who had led the era of peace and prosperity during the Qing Dynasty, was especially cautious of sweet talk. At one point, the Yellow River became clear, and a minister dedicated a flattering poem to the emperor. It credited the emperor’s reforms for making the river clean. However, the price for the flattering poem was a demotion.

The appointment decisions of President Lee Myung-bak have created controversies, and the absence of critical aides is a problem. However, the president should have asked his aides to give him honest opinions that may not have pleased him. He should have asked them to do what Yan Ying and Wei Zheng had done for their leaders.