New SKT CEO worked his way up to the top

New SKT CEO worked his way up to the top 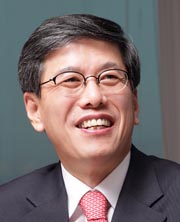 Ha Sung-min, SK Telecom’s new CEO, is not from a wealthy family and doesn’t have connections to a major politician or government official. Ha was a regular employee who worked his way up from the very bottom. Today, he heads Korea’s largest telecommunications company.

His ascent has given hope to employees that it is possible to get to the top without the traditional connections or a fancy background.

“Ha is a person who listens to what the people around him have to say,” a SK Telecom official said.

Ha graduated from high school in Busan and majored in business management at Sungkyunkwan University before joining SK Group, where he has worked for 28 years.

Another SK official said Ha has a stellar work ethic and hasn’t joined subgroups within the company, which has helped him avoid possible conflicts within the organization.

Ha is also known as an ethical person and a good leader.

An official with an SK affiliate said he has never seen Ha try to court government officials, even though he has had opportunities to do so.

“I lack experience compared to the CEOs of our competitors, but there are 4,600 employees behind me who are watching me closely,” Ha said. “As their leader, I will not let them down.”