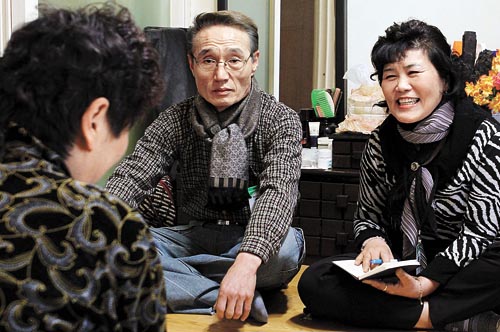 Kim Myung-soon, right, and her husband Oh Gang-heung, center, conduct a site visit with an elderly woman surnamed Lee at her home on Jan. 7. As volunteers for Seoul Welfare Foundation, Kim and Oh visit Lee twice a week. By Kim Seong-ryong


When Kim Myung-soon and her husband Oh Gang-heung arrived at the home of an elderly lady surnamed Lee, 73, earlier this month, they got a blast of cold air.

“I told you to keep your room warm,” Kim said as she entered the apartment, which is located in Jung District, central Seoul.

Kim said she couldn’t help but scold Lee, who said she would rather be cold than pay her heating bills.

“I went to the police station the other day and asked them to take me in because I’m a spy. I think staying in jail sounds better than here,” said Lee, who underwent surgery for stomach cancer last May. Although she is in constant pain, it’s hard for her to even think about going to the hospital because she lives hand to mouth.

On the surface, it seems as though Lee should qualify for social welfare. But because she has three children who are over 18, she is ineligible, regardless of the fact that she hasn’t seen her children since she fled her home when she was young, unable to bear her husband’s physical abuse.

As they listened to Lee’s story, the couple wrote down every detail, checking her household goods, the temperature of the room and the floor. They even browsed through the refrigerator.

The couple will file a report on Lee’s situation with the Seoul Metropolitan Government, which will then take steps to help her.

Kim, 56, and Oh, 60, are on-site counselors for Seoul Welfare Foundation, which employs volunteers to conduct site visits with people in need and then pass the information on to the city government so that it can help.

The foundation has 400 volunteers, who are sent out every time someone calls for help. Once they have made contact with a potential client, the volunteers visit them once or twice a week.

Kim and Oh have visited people in a variety of situations, from an elderly man suffering from domestic violence to the children of a single parent.

They once connected a woman requesting help for her husband, whose cancer had returned, with a hospital that would provide him with free medical care. Another time they helped a family, whose business had gone bankrupt, buy school uniforms for their children.

Before Kim worked for the foundation, she had already been famous for her seven years of volunteer work in the district.

She is currently the chief of Jung District’s Office of the Korea National Red Cross, where she provides assistance to a population that includes multiethnic families and North Korean defectors.

When it heard about her work, the Seoul Welfare Foundation asked Kim to volunteer for them.

“Most people in need are hesitant to talk about their situation or ask for help,” Kim said. “I’ve always thought I could help by speaking for them. So when the foundation offered me a job, I took it right away.”

Seeing her enthusiasm, Kim’s husband was touched, and he, too, became a volunteer. Together, they became the first couple to work as a team. The couple said their own experience of having been in need prompted them to help others. The two started a clothing business when they got married in their 20s, but the business went under and they were forced out onto the streets with their children.

“You can’t live with relatives forever,” Kim said with tears in her eyes. “The sorrow of having no home or watching your children crying for food is beyond description.”

Ten years ago, the two finally pulled themselves out of poverty when they succeeded in establishing a small distribution company. Although they are not living an abundant life financially, they are thankful for being able to have three meals a day.

“What people need the most when they are going through hard times is someone who listens to them,” Kim said. “And I want to be that person.”

Seoul Welfare Foundation was established last March to help people in need. Anyone who needs help can call 1644-0120.