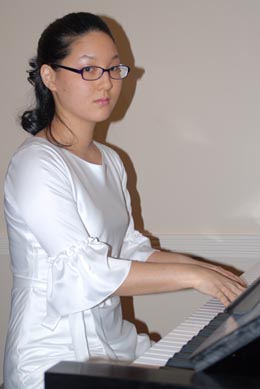 The gifted 17-year-old studied under Vladimir Horowitz (1903-1989) and Evgeny Kissin, but she has never met them. She learned to play by studying video clips of their performances on YouTube in the half-basement room in Ho Chi Minh City where she lived with her family after financial difficulties led them to move to Vietnam four years ago.

Her family’s financial situation also meant that Kim was also unable to go to secondary school. But her initiative and perseverance led her to obtain a high school diploma through a qualification exam. All the while, she dreamed of playing at Carnegie Hall.

That dream finally became a reality when she stepped onto the stage at the renowned venue last weekend.

At the beginning of the performance, Kim seemed a bit nervous to be standing on such a big stage. But as the sound of the horns began reverberating through the hall, she came out of her shell and played with the passion and restraint of a professional. It was hard to believe that she had acquired her technique entirely through the video sharing site.

When the two-hour program had come to an end, the audience of around 2,000 people all stood up to give her a big round of applause.

Kim and her father arrived in New York last February. Without any connections or an appointment, they walked into the Juilliard School hoping they’d get lucky. Not surprisingly, no one was willing to meet with someone who had just walked in off the street.

Later, however, she happened to meet Jonathan Griffith, conductor of the Lincoln Center Orchestra, and he agreed to hear her play. When Kim showed Griffith video clips of a performance she did with an orchestra in Ho Chi Minh City, the conductor was taken aback, saying, “Talent of this caliber will give you a standing ovation at Carnegie Hall.”

Encouraged by his compliments, Kim and her father decided to go next to Carnegie Hall. The performance manager was perplexed to see them, but he was so impressed with her playing that he invited her to apply for a slot in the performance season.

It took Kim just four months to pass the screening process, which usually takes about a year or two. Then, the Vietnam National Symphony Orchestra volunteered to accompany her in the concert.

The next hurdle, however, was perhaps the most difficult. Kim had to raise money for the venue rental fee and a marketing campaign. Upon hearing of Kim’s dilemma, Korean companies started volunteering to pitch in.

Kim’s Carnegie Hall debut was sponsored by The Present, a nongovernmental organization dedicated to cultural exchange programs between Korea and Vietnam.

Meanwhile, Kim is already busy pursuing her next goal.

“I want to study at the Juilliard School and become a world-class pianist,” she said.