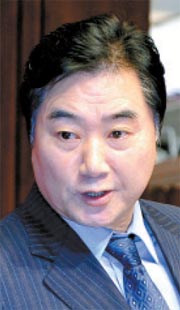 A lot of the Democratic Party’s mud-flinging has hit its marks in recent months, including four cabinet appointees who have had to give up their nominations.

But the party’s charge that the son of ruling Grand National Party Chairman Ahn Sang-soo got into a prestigious law school because of his father’s influence backfired, and it’s time for profuse apologies and a defamation suit.

“I offer my apology to Ahn, his family and the Seoul National University School of Law,” DP Representative Lee Seok-hyun said yesterday, according to party spokeswoman Jeon Hyun-heui during a briefing.

The day before, Lee had accused the school of admitting Ahn’s son and passing over more qualified applicants. From its waiting list, the school had chosen the first-ranked student and the seventh, Lee said, to fill its class. He said Ahn’s son was the seventh candidate.

“The chosen students were not numbers one and two,” Lee said at a National Assembly gathering on Thursday. “I heard that numbers two through six were furious.” Lee, an alumnus of SNU Law, said underclassmen had informed him of the situation and he demanded an investigation.

Ahn had immediately denied the accusation. Cho Kuk, an SNU law professor known for his critical views toward the GNP, posted on Twitter Thursday that the accusation was “completely false.”

“The student was second place among five students we chose, and the selection was made based on grades and in disregard of his father’s status,” Cho wrote in his Twitter posts. “This is material for a lawsuit from the student, and articles [in the media] need to be corrected.

“Even if I do not like Ahn Sang-soo,” he wrote, “facts are facts. The rights of the son should be protected. This is not a political problem, but a matter regarding the confirmation of facts.”

Cho also said that wrongful admission would be a “serious crime” and that the school’s professors would not tolerate such behavior.

Apologies were quick in coming. “It is shameful that [the accusation] was announced and the public troubled without the facts being confirmed,” DP Chairman Sohn Hak-kyu said yesterday during a meeting of senior party representatives.

“I feel sorry that the responsible political party caused anxiety to the general public with this false accusation,” said Sohn.

Park Jie-won, the DP’s floor leader, who had said on Thursday that Lee’s accusation was “accurate,” said yesterday that he apologized to his GNP counterpart, Kim Moo-sung, after a phone call with the president of SNU.

The GNP yesterday sued Lee and floor leader Park for defamation. The ruling party plans to file a civil lawsuit to seek compensation.

“Representative Lee has apparently given an apology after it was discovered his accusation about Ahn’s son gaining wrongful admission to a school was wrong,” said GNP party spokesman Ahn Hyoung-hwan yesterday, “but the GNP will stick to the legal processes that have been planned.”

Ahn added, “This ‘hit-or-miss’ method of politics by the Democratic Party should be rooted out.”