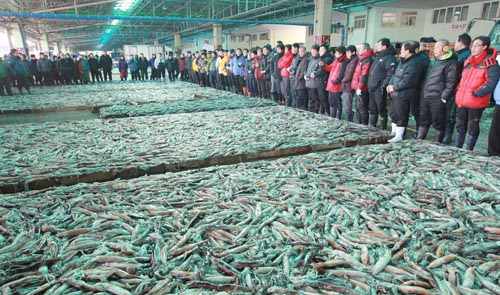 Merchants hold a public auction for squid at the Busan Cooperative Fish Market Thursday as fishermen turned to catching squid because of a lack of mackerel in the waters off Korea. By Song Bong-geun


“Why are the mackerel so tiny?” complained Kim Soon-nam, 74, who visited Noryangjin Fisheries Wholesale Market, Seoul, to buy mackerel for dinner Thursday afternoon.

“I’ve been walking around the market for ages but haven’t found any mackerel that’s big enough to put on the dining table. I think I will have to buy a different kind,” Kim said with a deep sigh.

Fresh mackerel measuring less than 20 centimeters (7.8 inches) long is currently being sold for 10,000 won ($9) for four. Merchant Park Mal-soon, 70, said, “Mackerel this size usually costs 10,000 won for six. The price went up.” Mackerel were hardly seen in other stores at the Noryangjin market.

“People consider mackerel as a fish for commoners but not anymore,” said another merchant Kim, 59.

According to the National Fisheries Research and Development Institute (NFRD), the number of mackerel catches last year decreased by half compared to previous years. Last year, 99,175 tons of mackerel were caught, down from 173,329 tons in 2009 and 190,456 tons in 2008.

And it’s not only the amount - the size of mackerel diminished noticeably. Compared to previous years, 70 percent of mackerel caught last year were categorized as small - weighing around 300 grams - which can only be used for either animal feed or canned for export.

Consumers’ favorite mackerel, measuring between 30 to 35 centimeters long and weighing around 500 grams, are in short supply.

Experts say the main cause for the decrease in mackerel catches was lower temperatures, down by 1 to 2 degrees Celsius (1.8 to 3.6 degrees Fahrenheit) in the waters off Korea last spring.

This phenomenon spurred mackerel, most commonly found in temperate waters, to come up from the south later than usual and caused them to swim back earlier.

Kang Soo-kyung at the NFRD said, “The waters of Jeju Island, which is the prime fishing ground, had slightly lower temperatures than average years, leading schools of mackerel to go to the southern part of the island.”

Kang said that is why “fishing boats are staying in the nearby east coast to catch squid these days, rather than heading south to catch mackerel as oil costs for traveling are a problem.”

The fishing industry is concerned, as they foresee the higher price of mackerel to stay elevated for some time.