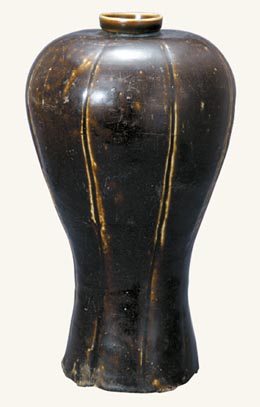 This heukja (black porcelain) vase is just one of the rare works in the exhibition “Heukja: Old Vessels Brimming with Black,” which runs until March 31 at the Horim Museum in Gangnam, southern Seoul. The exhibition is the first dedicated entirely to heukja from the Goryeo and Joseon Dynasties. Provided by Horim Museum

Although art aficionados should be familiar with the pale green celadon and white porcelain of the Joseon Dynasty, heukja (black porcelain) from the Goryeo Dynasty has been largely overlooked.

But a new exhibit at the Horim Museum in Gangnam, southern Seoul, offers a rare glimpse of this special ceramic art.

The exhibit, “Heukja: Old Vessels Brimming with Black,” is the first one devoted exclusively to black porcelain.

It features about 60 pieces of heukja from the Goryeo and Joseon Dynasties, according to the Horim Museum, which held several exhibitions on Korean ceramics in the past.

Most heukja have black, brown or amber-tinged surfaces because of the high proportion of iron oxide in the glaze.

But the exact color of the glaze depends on where and when the heukja was produced, the Horim Museum said.

The pieces on display at Horim have a slightly rough appearance because they were used in daily life, but they have still managed to hold onto their character.

Historians believe that heujka was first produced at facilities in Goheung and Haenam, South Jeolla, after the establishment of the Goryeo Dynasty. 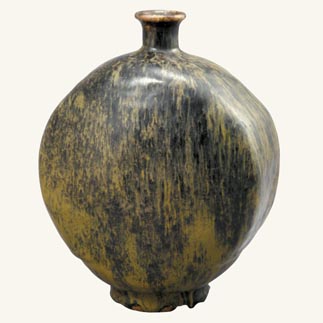 But these facilities primarily made celadon, and heukja was seen as secondary.

In fact, there were no dedicated heukja manufacturing facilities until the 17th century, the museum said.

Heukja production peaked during the 19th century and ultimately declined in the early 20th century as the Joseon Dynasty fell and modern storage began to take over.

*The exhibition runs through March 31. The museum is open from 10:30 a.m. to 6 p.m. and is closed on Sundays and the Lunar New Year holidays.