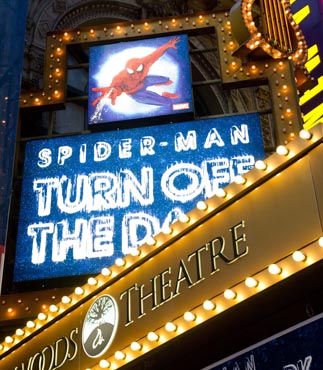 The marquee for “Spider-Man: Turn Off the Dark” is seen outside the Foxwoods Theatre on West 42nd Street in New York. [AP]

NEW YORK - Broadway’s costly “Spider-Man: Turn Off the Dark” has been delayed again to March 15 to “fine-tune” the high-tech production and work on a new ending even as it proves a hit at box offices in previews.

Producers made the announcement late on Thursday following a series of accidents during preview performances of the $65 million show - Broadway’s most expensive ever - that has injured four actors, as well as reports of new staging and music from director Julie Taymor and U2’s Bono and The Edge.

But even in previews, fans have turned out in droves for the production that is based on the crime-fighting comic book hero.

Separately on Thursday, The Broadway League said “Spider-Man” was the best-selling production of the week between Christmas and New Year’s Eve, raking in $1.588 million at the box office.

“We are so grateful for the enthusiastic audiences who have been coming to see ‘Spider-Man: Turn Off The Dark’ and we are dedicated to giving them the very best show we can,” Taymor said in a statement.

Producers Michael Cohl and Jeremiah J. Harris said the new delay, which pushes back the opening from a previous date of Feb. 7, was done to “fine-tune aspects of the show, including the new ending.” Cohl said the date should give the creative team plenty of time to ensure a good show and added this new delay will be “the final postponement.”

“We are looking for the extraordinary here, we are nearly there,” Bono and The Edge added in a joint statement.

The show features massive sets and numerous stunts in which cast members soar through the air above the audience. But all the high-tech wizardry has not been without problems.

Four actors have been injured. Most recently, actor Christopher Tierney, 32, fell 30 feet from a platform and broke his ribs. He was hospitalized and had to have surgery.

The show had been delayed four times. Before the Feb. 7 date, it had been set to open on Jan. 11. Preview performances began on Nov. 28.