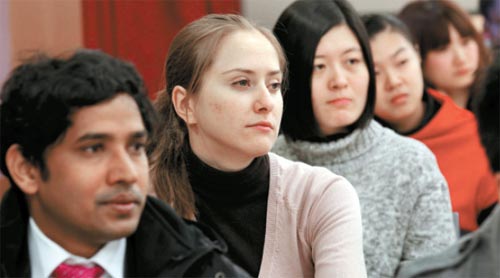 Foreign students employed by the city government in the Seoul Global Internship program participate in an orientation meeting on Jan. 7 at City Hall. [YONHAP]


Seoul’s city government hired 44 foreign students living in Seoul for the 6th global internship program, in an effort to promote Seoul and give them opportunities to work in the government. The program runs from Jan. 7 to Feb. 11.

Since the first summer internship program in 2008, Seoul’s government has recruited some 40 or 50 foreign students attending universities in Korea for the five-week internship twice a year, in summer and winter. Based on their majors and interests, the students are dispatched to various departments of the government or other affiliated organizations that have a need for foreign assistants.

“The most important purpose of this internship program is to help foreign students in Korea build up their careers and to understand Seoul, where they are living,” Oh Seung-hwan, the director of the government’s Foreign Residence Assistance Division, said at orientation meeting with the students on Jan. 7. “We expect these students from 20 countries will be actively engaged in the internship program as a vanguard to boost diplomatic relationships between their countries and Korea in the future.”

For Russian student Ovsyannikova Anastasia, 23, who is working for the Seoul Welfare Foundation, the internship is a perfect chance to improve her studies in social welfare at Kyung Hee University’s Graduate Institute of Peace Studies.

“My job is researching international organizations and global agendas related to welfare,” Ovsyannikova said. “I have always been interested in human rights and social welfare so I have no doubt that this job is an opportunity for me to boost my understanding of the issues.”

Kwon Hyo-jung, an official at the welfare foundation’s International Corporation Division, said, “After she finishes some research in the office, we are thinking of sending her to a daily care center for elderly people to give her field experience.”

Sayaka Uchida, a 32-year old Japanese student attending Hankuk University of Foreign Studies, is helping set up an online marketing strategy for Seoul at the Global Marketing Division in the government.

“Someday I hope to work in a Korean trading company, and I believe this internship experience will help me get a job in Korea,” Uchida said.

Choi Do-hee, an official at the marketing team said Uchida is a big help to the team, which has been looking for new ways of promoting Seoul through online media.

“In Japan, companies and online users have highly developed their homepages and blogs to improve their branding,” Choi said. “In this sense, we asked Uchida to point out the strengths of Japanese online marketing, like how Japanese organizations are promoting social networking services or how bloggers are sprucing up their homepages, because as non-native speakers we had difficulties researching Japanese Web sites. She is also helping another division to upgrade the Japanese homepage of the Seoul city government.”

Christian Brocard, an American student studying law at Seogang University as an exchange student, and Ratu Ayu Putri, an Indonesian student at Kyung Hee University’s Graduate Institute of Peace Studies, are engaged in building a network between Seoul and other cities worldwide for the International Cooperation Division of the Seoul government.

“We are researching other cities that have relations with the Seoul government and contacting many people to renew their contact points, because mainly this division’s role is holding events [between Seoul and other cities], such as the ‘Seoul Friendship Fair,’” Putri said. “For me, it was a very new mechanism for a city to connect with other cities abroad.”

Brocard, who majored in business administration, said, “I hope to learn about the inner-workings of the Seoul government, not just a business product, but about how a government system works. It has been very interesting so far.”

Kim Seong-hee, the manager at the same division with the foreign students, said she will hire them again as volunteers for its upcoming festival in May.