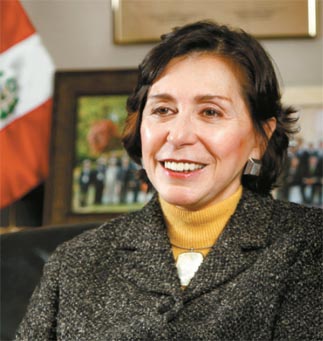 When Peruvian President Alan Garcia visited Seoul in November 2009, he took a hike on a mountain near the Blue House with President Lee Myung-bak.

Somehow, Garcia managed to tear his trousers on the hike.

The incident, which might have caused diplomatic embarrassment, instead became an opportunity for the two presidents to affirm their friendship. Lee noticed the rip and had his aides repair the trousers, while Garcia agreed to wear a pair of loaned pants provided by the Blue House, according to a diplomatic source.

Such unpretentious friendliness showed the unique chemistry between Lee and Garcia, fostered by numerous good-will exchanges, the source said, which flowered with the rapid conclusion of a free trade agreement between Peru and Korea in August 2010.

Marcela Lopez Bravo, the Peruvian Ambassador to Seoul, said in an interview Thursday that the maturing ties between Korea and Peru, based in part on the Lee-Garcia friendship, will mark a new high this year if the agreement is successfully ratified.

“Of course I hope that,” said Lopez Bravo, when asked whether she believes the Korea-Peru FTA will take effect this year. “I can’t give all my assurances because it depends on the governments (and parliaments), but our embassy here in Korea and the Korean embassy in Lima are working hard to confront the many obstacles.”

The Korea-Peru FTA, Korea’s second with a South American country after Chile, was initialed and signed during visits by Garcia last November.

The agreement is now undergoing a legal review by both parties, and parliamentary ratification by the two countries is expected as early as the first quarter of this year.

Having closer economic ties with a country rich in natural resources will be a help to Korea which has little else than human resources. Peru is the world’s largest producer of silver, the second largest of zinc and the third largest of tin, according to the Ministry of Knowledge Economy.

And Peru is not as laid back and sleepy as Koreans may think, Lopez Bravo said, especially in its cities. Peru’s urban areas, including the capital of Lima, has no less bustle than Seoul, she said.

“Many Koreans coming back from Peru say to me, ‘Your country is very active. I can feel it in the cities,’” the ambassador said.

Peru’s economy is estimated to have grown more than 8.5 percent last year, with this year’s growth expected to reach 6.5 percent, robust for even an emerging market. Its main stock market recorded 65 percent growth last year, the highest among the developing nations of the MSCI Emerging Markets Index.

The ambassador believes trade with Peru will open up the Latin market for Korea, since it shares borders with Brazil, Ecuador, Colombia, Bolivia and Chile, and has the Pacific to its west. In particular, a growing partnership between Peru and Brazil, the continent’s largest economy, will provide more business chances for Korean companies, she said.

Over the past few years, groundwork has been laid for bilateral cooperation in other fields, such as nuclear energy, the environment, technology, cultural affairs and education, she said.

“I hope that this will be a year in which we can get started on all the matters we have worked together on for three, four or five years,” she said.

An exchange on archeological studies, including a Korean scholars’ visit to the ruins of the Inca Civilization in Peru, is among the new projects that she plans for this year to improve bilateral cooperation.

Lopez Bravo came to Korea in May 2007. The ambassador said the Asian country was almost unknown to Peruvians 10 years ago, but is being discovered quickly and in a positive light.

The so-called Korean Wave, or export of Korean pop culture, is gaining popularity in Peru with many Korean dramas airing since the early 2000s.

She said Peruvians relate to the family-orientated lifestyles of Koreans and their openness as depicted in films and television serials.

“The idiosyncrasies [of Koreans and Peruvians] are very similar,” she said.

Peru will have new leadership this year with a first round of the presidential elections slated for April.

The ambassador said a leadership change won’t hurt momentum in the relationship between Korea and Peru.

“Korea is a very important market for us and our candidates are not taking a different point of view in this matter,” she said.