Last week, Chinese generals dominated armistice talks with tactics they had used on the battlefield and the allied forces began devising ways to counter them. 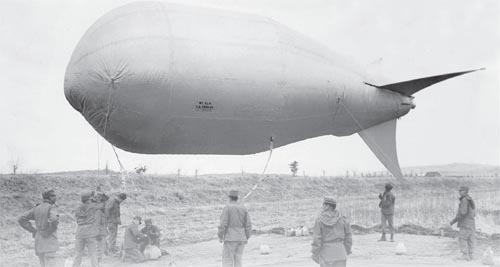 U.S. soldiers prepare a white inflatable object resembling an aircraft in March 1952 in Kaesong, North Hwanghae. The inflatables were to act as warning signs for enemy and allied aircraft from bombing the armistice talks venue and its surrounding area. Provided by the U.S. National Archives and Records Administration


I participated in the armistice talks at Kaesong, North Hwanghae Province for a little over three months before returning to my duties as the commander of the ROK 1st Corps.

During the armistice talks, I felt it was necessary to try and push the truce line as far north as we possibly could. The communist representatives had suggested we call a cease-fire at the old 38th parallel, which was in place prior to the start of the war.

But it was a stretch to suggest such an idea since the United Nations had an overwhelming advantage on the sea and in the air at this stage of the war. I approached Adm. C. Turner Joy and spoke to him about the issue. The admiral asked me what I thought was a fair place on the map to draw the line.

“I think it would be ideal to draw the line along Pyongyang and Wonsan. We could call it the Pyongwon line,” I said. “It’s a line that has been used in the past to fend off enemies coming from the north. It’s a natural defensive line considering that just to the north of the line are rough mountainous areas.”

Admiral Joy listened intently and agreed with me immediately. He suggested the cease-fire line be drawn at the Pyongwon line at our next meeting with the communists but as we expected, they immediately shot the idea down.

We didn’t need to discuss the issue with the communists, we merely had to put more pressure on our enemies and push them back until the front line was moved to the Pyongwon line. But we did need the approval of Gen. Matthew Ridgway, who frequently visited us in Munsan, Gyeonggi. 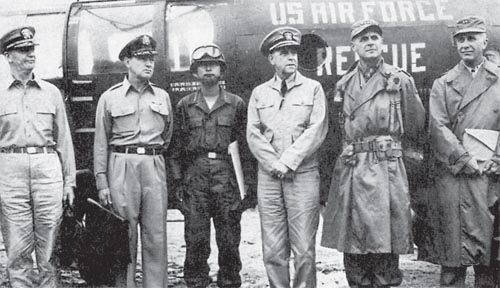 
When I briefed General Ridgway on the idea of driving our enemies north to the Pyongwon line, he didn’t show much interest. He made it clear that he did not want to sacrifice anymore lives, nor did he like the fact that the supply line would be stretched out even more if we decided to advance north. He also didn’t think we were fully ready to face another head-on attack from the enemy.

I also spoke to him about the importance of the Han River and our need to at least secure the Yesung River or else the Han River would lose its significance as Seoul’s main transport waterway. But no matter what I said, General Ridgway was more interested in carrying out the direct orders from Washington to cease hostilities and withdraw U.S. troops from Korea. I could not help but think about what Gen. Douglas MacArthur would have done in the same situation.

General Ridgway was an excellent general and commander but he was different from General MacArthur in that he was not as keen on driving the communists out of the Korean Peninsula. This resulted in several heated arguments with General Ridgway. I tried to emphasize that Korea was better when it was united and that the cease-fire negotiations had to be conducted in a manner that would help bring about a unified Korea in the future. I don’t know where he learned about the Samhan Dynasty, but he referenced in his arguments the Mahan, Jinhan and Byeonhan confederacies. He also spoke about the Three Kingdoms period as examples that Korea had, in fact, often been divided throughout its history.

But General Ridgway didn’t totally disregard my suggestions. On July 31, 1951, General Ridgway made a public statement that the cease-fire line must be set up along the Amrok River in the areas of Kaesong and Pyongang. The announcement had several underlying messages. It let our enemies know that we were taking a realistic approach by drawing the boundary at the current front lines near Kaesong and Pyongang but also let them know that the allied forces were fully capable of pushing the communists north. 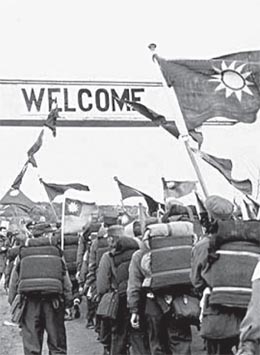 A group of captured Chinese PLA troops who had refused to return to China enter a United Nations camp in January 1954. The men were sent to Taiwan. Provided by U.S. National Archives and Records

The Chinese and North Korean commanders were insistent on the line being drawn along the 38th parallel and were also fixated on the idea that the foreign troops be withdrawn from the Korean Peninsula.

At a later date, we found out that the Chinese commanders were fixated on another major issue. With a large number of Chinese troops participating in the war, there was also a great number of Chinese soldiers held captive by the allied forces. A large majority of the captives actually turned down the offer to return home to China and instead wanted to go to Taiwan, which had recently earned sovereignty from China.

With such issues on the table, we saw no progress in the armistice talks. We often had arguments over what seemed like minor details in comparison to the larger issues at hand. I just saw it as psychological tactics by the communists.

The armistice talks would sometimes come to a stop. On Aug. 4, we got the news that a squadron of the Chinese People’s Liberation Army had encroached into a neutral zone near the venue of the armistice talks. The communists had tried to intimidate and rattle us by having fully armed PLA troops march into the neutral area.

The U.S. commanders and I were standing outside after our lunch break when we spotted the PLA troops roughly 300 meters away. We had a four-kilometer (2.4 mile) radius around Naebongjang, the venue for the armistice talks, which was considered a neutral site. With the talks being held in the enemy’s zone, we could not help but look on in stunned disbelief. We strongly opposed the move and, surprisingly enough, the communists quickly owned up to their mistake and made a rare apology. The talks ended up being stalled for a total of six days.

We experienced another delay on Aug. 23 based on a complaint from the communists that a United Nations’ airplane had bombed the neutral zone of Kaesong. It was not true, but the communists continued to complain and we had no choice but to halt the negotiations.

The Americans had nearly up to the minute contact with Washington. A vehicle equipped with the latest communications technology was parked outside Naebongjang that allowed the U.S. commanders to keep Washington and General Ridgway in Tokyo informed of the progress of the talks while also giving orders on how to respond and conduct the talks.

In comparison, the communists had a very outdated communication line. When a situation arose in which the communist commanders had a difficult time making a decision, it took them days to reach Pyongyang or Beijing for directions. The false complaint about the bombing in the neutral zone, among other preposterous complaints, naturally bought them time to communicate.

It became natural for the cease-fire talks to come to a sudden halt and it happened on several occasions.

For me, it became increasingly difficult to focus on the negotiations knowing that we were not going to make any progress.