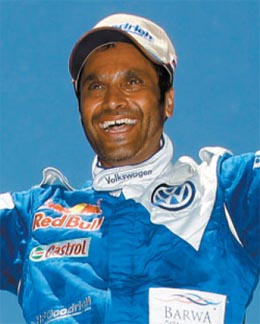 BARADERO, Argentina - Nasser al-Attiyah of Qatar claimed his first Dakar Rally title in the car class and Spanish rider Marc Coma won the race for the third time in the motorbike class as the two-week trek wrapped up on Saturday.

The Qatari driver finished second in the 13th and final stage as Volkswagen swept the podium.

Carlos Sainz of Spain, the 2010 champion, won the stage by 38 seconds over al-Attiyah to hold onto third overall. South African Giniel de Villiers was second overall, 49 minutes, 41 seconds behind al-Attiyah. Sainz finished just over an hour and 20 minutes back.

In bikes, Coma was fifth in the final stage, 2 minutes, 16 seconds behind winner Frans Verhoven of Belgium. Coma, who rode a KTM bike, finished 15 minutes, 4 seconds ahead of Cyril Despres in the overall. Helder Rodrigues of Portugal was third, more than an hour and 40 minutes back. Al-Attiyah, who was second last year to Sainz, called the victory “the biggest moment of my career’’ and said it would put Qatar on the map.

“It means a lot to win a Dakar, for me, for my people, for my country and for my team,’’ he said. “It is a great victory. It’s hard to explain everything that goes through your head. But it is a very nice feeling. We demonstrated that we [Volkswagen] have the strongest team in the world. .?.?. I think that now people will finally know where Qatar is located.’’

Al-Attiyah took the lead from Sainz by winning Monday’s eighth stage in Chile’s Atacama desert, pushing him five minutes ahead of the Spaniard. The Qatari clinched his victory when he won Thursday’s 11th stage. Sainz crashed and broke his right front suspension on the leg, which cost him more than an hour and any chance of a repeat victory.

Both al-Attiyah and Coma were all but ensured of victory going into the final stage, but Coma said even then he could not relax.

“What was really tough was that I could not let my guard down, not even for a second,’’ the Catalan said. “The truth is, with the race and the permanent tension, I did not have time to think about anything else in a long time.’’

“As anyone in the Dakar, we had tough times,’’ Coma added. “So I am going to get some rest and think about the future.’’

Coma moved into the lead by winning the fourth stage, giving him a narrow 2-second edge on Despres. The Frenchman was later penalized 10 minutes on the stage for not following starting procedures, leaving him 10 minutes, 2 seconds behind. He never recovered.

Official awards will be presented Sunday in Buenos Aires, which is located about 200 kilometers (120 miles) from Saturday’s finish. The rally left the Argentine capital on Jan. 1.

Argentina officials said before the race they expected it to return to Argentina next year. Some reports suggest a new route next year with Brazil possibly being included. This is the third straight year the rally has been run in South America between Argentina and Chile. It was traditionally run in Europe and Africa but moved after 2007 because of violence.