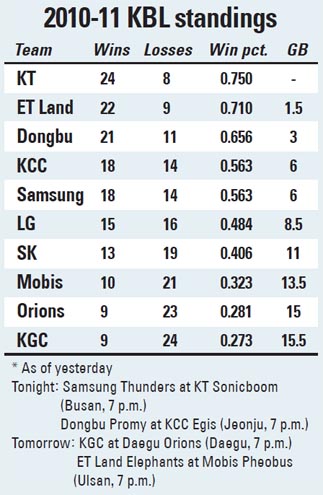 With the absence of Kim Joo-sung, Yoon Ho-young of the Wonju Dongbu Promy emerged as one of the top players for his club in the first half of the KBL season. But lately, the Promy forward has been struggling to rediscover his role.

With Kim participating in the 2010 Guangzhou Asian Games, Yoon contributed an average of 16 points and seven rebounds per game. Yoon told the media a number of times that in order to establish himself as a solid contributor, he will need to continue to produce at the same level even with Kim back in the lineup.

But Yoon’s role has diminished and his averages has dipped since Kim’s return.

“Kim’s not in the best physical condition at the moment and that makes it tough for Yoon to coexist with him on the same team,” said Dongbu head coach Kang Dong-hee after his team’s 66-60 win over KGC on Sunday.

Dongbu relies heavily on Kim - its star player - and its offense is run through Kim most of the time. Kim has always been the focal point of Dongbu’s offense but the problem is when Kim holds onto the ball in the low post too long. If this happens, other players can’t contribute and Yoon has been the main player losing out.

Yoon is usually active and positions himself well without the ball. But with Kim and Rodrique Benson taking up space in the low post, there isn’t much room for Yoon to drive to the basket. If Kim rotates out to the perimeter more often, it could create more scoring opportunities for Yoon, but Kang has deemed Kim’s size and presence more valuable in the paint.

As a result, Yoon has had to settle as a perimeter player. But not that it’s all lost. He has improved his shot this season, despite not being able to drive for layups.

“Yoon faces many mismatches, but Kim and Benson have not been showing good movement in the low post of late,” said Lee Sang-yoon, an MBC Sports color commentator. “As a result, Yoon has not been able to play his game. With Yoon struggling to connect on his 3-point shots of late, the problem of Kim and Yoon’s inability to coexist on the same offense has been exposed.”

Yoon shot 40 percent from beyond the arc earlier this season but that number dropped to 34.7 percent as of yesterday. Yoon’s scoring average has also dropped to 13.3 points per games.

The last game in which Kim and Yoon gelled was on Dec. 10 against the Incheon ET Land Elephants.

Yoon played solid both inside and outside to score 20 points and lead his team to an 89-64 win.

Kim played more like a point guard rather than a forward, scoring seven points and adding five rebounds and seven assists.