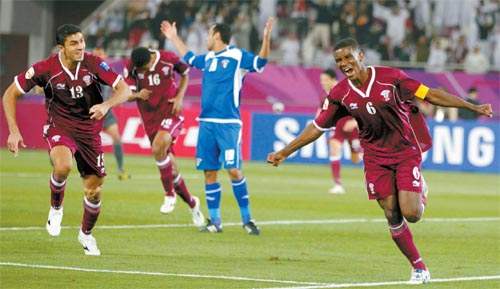 
DOHA, Qatar - Host Qatar reached the Asian Cup quarterfinals for the second time in its history Sunday following a 3-0 victory over Kuwait, as Uzbekistan also advanced with a 2-2 draw that sent opponent China home.

Qatar, flying high following its winning bid to host the 2022 World Cup, needed a victory against winless Kuwait to ensure it advanced. Two first-half goals in five minutes set manager Bruno Metsu’s side on its way and sent the crowd of 28,000 at Khalifa Stadium into delirious celebration.

Across town, China fought back from a goal down to draw with Uzbekistan, but the team still finished third in Group A. The early exit was the latest disappointment for the Chinese, who have struggled since qualifying for the 2002 Korea-Japan World Cup, having also left the Asian Cup early in 2007.

Uzbekistan topped the group with seven points, one more than Qatar. China finished with four points and Kuwait had zero.

“We were not good in the first match, but our real matches started with China,’’ said Qatar defender Bilal Mohammed, referring to a 2-0 loss to Uzbekistan followed by a 2-0 win over China.

“In the previous tournaments, we were out from the first round. But now we are better and deserve to qualify and go to the final.’’

Mohammed powered in a header from Ibrahim al-Ghanim’s deep cross in the 11th minute to give Qatar the lead.

Five minutes later, Mohamed El Sayed took advantage of a goal-mouth scramble to make it 2-0. El Sayed appeared to push his marker out of the way to reach the long ball out of defense, but no whistle came.

His initial header was saved and Sebastian Suria’s follow-up was blocked, but El Sayed got to the loose ball and sent it into the top corner with goalkeeper Nawaf al-Khaldi stranded.

Qatar substitute Fabio Cesar wrapped up the victory in the 86th, curling a left-footed free kick around the wall and into the top corner past a static goalkeeper.

Metsu admitted he and his players have been under pressure to match the well-organized tournament with a display on the pitch that showed they are better than the team’s position of No. 105 in the FIFA world rankings.

“The team was influenced by the importance of the opening match and it had an impact on the mentality of the players,’’ Metsu said. “With today’s performance and victory, they have reached the point they were aiming at.’’

Kuwait’s best chance came right at the end of the first half when a cross found Walied Ali in space at the far post, but his angled shot was diverted behind by goalkeeper Qasem Burhan.

Qatar’s qualification should give the tournament a boost and keep the host nation interested, especially in light of poor performances from most neighboring Gulf teams. Thousands of Qataris, often wearing the team’s maroon-and-white colors, have watched their team live in action.

“This is the team that we all know,’’ said Mohammed al-Merri, a 24-year-old student. “Today we proved that we can win the cup and beat all the teams. We are so happy about the way they played. This is a big result which we will never forget.’’

Yu Hai gave China the lead against Uzbekistan in the sixth minute with a diving header that only just beat the goalkeeper. Odil Akhmedov equalized in the 30th and Alexander Geynrikh’s booming drive from outside the area gave Uzbekistan a 2-1 lead in the 46th. Hao Junmin leveled for China with a curling free kick in the 56th.

“This Asian Cup was a great experience for our young team,’’ China coach Gao Hongbo said. “We could learn a lot. We had many chances in this match, but we were unfortunate.’’

Uzbekistan now plays the Group B runner-up on Friday, while Qatar plays the top team in the same group.

“It was a good game. We won the group, everyone is pleased,’’ Uzbekistan coach Vadim Abramov said.