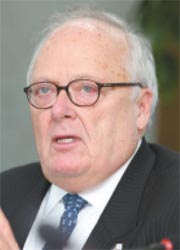 Edwin Feulner, the president and CEO of the Heritage Foundation, said during a conference in Seoul yesterday that he was “personally shocked about China not reining in North Korea,” referring to the North’s attacks on South Korea last year.

“Primarily, it’s China’s responsibility to remind Pyongyang of what’s expected of them,” said Feulner at the Asan Institute for Policy Studies. “Where we go from here I’m not sure, but the relation that the presidents of the U.S. and ROK have is a good sign.” The president of the policy research organization added that the North Korea issue would be discussed at length during Hu Jintao’s visit to the U.S. for summit talks, which start today.

While U.S. authorities have made recent statements underscoring the threat North Korea imposes with its nuclear program and arsenal of missiles, Feulner said that foreign policy does not receive as much attention as domestic policy in the U.S.

“Don’t expect U.S. leaders to pay much attention to foreign policy,” said Feulner, explaining that fiscal matters are in the forefront as federal budget cuts are being considered. He said that international policy was “not a central issue” during last year’s elections.

Feulner also spoke about recent free trade agreement developments between the U.S. and South Korea, saying that American officials are looking to gain approval of an agreement in the first half of the year.

Feulner said U.S. trade representative Ron Kirk has indicated the U.S. hopes to finalize the deal with South Korea before the July 4 congressional recess in the U.S. and also before the FTA between the European Union and South Korea goes into effect. The EU-ROK FTA is seen as a rival trade agreement by the U.S.

Feulner was in Seoul to participate in a discussion of the implications of the recent U.S. elections on U.S.-Korea ties. He has held his position for more than 25 years at the Heritage Foundation, recognized as one of Washington’s most important public policy research organizations.