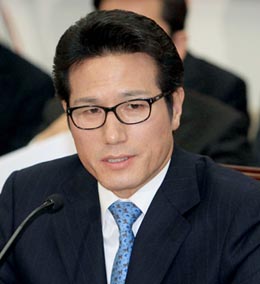 Unlike feisty attacks against other nominees for top government posts, the confirmation hearing of Choung Byoung-gug, three-term lawmaker named to become the new culture minister, was uneventful yesterday as both ruling and opposition representatives treated their colleague gently.

Although the Democratic Party had earlier vowed to grill Grand National Representative Choung about suspicious real estate transactions, the opposition lawmakers were not as persistent as they had been in other confirmation hearings. At the hearing, Choung was asked by opposition lawmakers about alleged tax evasion and plagiarism, but no yelling or finger-pointing took place. Choung denied most of the accusations.

The Grand Nationals used the opportunity to defend Choung’s qualifications and promote his expertise. Choung has long served on the National Assembly’s Culture, Sports, Tourism, Broadcasting and Communications Committee.

Choung most recently was the committee’s chairman.