Ex-spy chief kicked out of club for NIS retirees

Ex-spy chief kicked out of club for NIS retirees 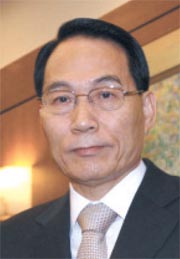 A former National Intelligence Service chief has been kicked out of a club of his colleagues for blaming the Lee Myung-bak administration’s policy toward Pyongyang for the escalated tensions between the two Koreas.

Yangjihoe, an association of retired officials of the National Intelligence Service, issued a statement Sunday saying it had expelled Kim Man-bok, who served as director of the country’s main spy agency from November 2006 to February 2008 under the Roh Moo-hyun administration.

“We held an emergency board of directors meeting on Friday and decided to expel Kim for having disgraced the club and prompting troubles,” the statement said.

The 7,000-member club also urged the National Intelligence Service to investigate and punish Kim over the alleged leak of secrets that he had obtained in the line of duty.

Kim, 65, faced fierce criticism from the club and the nation’s conservatives for his recent contribution of an article to Sekai, a leftist journal published in Japan. In its February edition, which has already been published, Kim wrote that “the Yellow Sea has turned into the sea of war since the Lee administration” has been in power. He also said the Lee government’s policy to alienate Pyongyang by strengthening its alliance with the United States and by consulting with Tokyo and Washington has brought about the return of Cold War-style confrontation between the two Koreas.

Kim also questioned the veracity of Seoul’s conclusion that the North sank the South’s warship Cheonan last March. He claimed that only 21 percent of the South Koreans trust the conclusion.

Kim said he wrote the article before the North’s shelling of Yeonpyeong Island in November. But he added a postscript to the article after the November attack in which he wrote: “the defeat in Yeonpyeong was prompted by a huge hole in the South’s security posture.” And, he added, “no more lives of soldiers and civilians should be lost because of the frozen inter-Korean relations caused by the Lee administration.”

Kim’s article has also enraged one of the largest conservative groups in the country. The Korea Freedom Federation issued a statement on Friday, claiming that Kim had made public confidential information that he had learned while serving at the spy agency.

Kim wrote in his article that the two Koreas had agreed to establish a special peace and cooperation zone in the Yellow Sea in 2007. The federation said making that agreement public is in violation of the law governing confidentiality of a spy agency official.

“Under the law governing the NIS, all employees are forbidden from making public the secrets obtained in the line of duty during their service and even after their retirement,” the federation said. “Kim clearly violated the law, and the government must severely punish him.”

It was not the first time that Kim has been involved in the leak of confidential national security information. The JoongAng Ilbo reported on Jan. 10, 2008, about a transcript of sensitive conversation between Kim and his North Korean counterpart, which took place during Kim’s secret visit to Pyongyang on the day before the presidential election in 2007. After an investigation into the leak, Kim admitted that he had provided it to the newspaper and resigned from his post.

Kim also recently planned to publish a book on his views about the nuclear crisis, but the National Intelligence Service barred him from doing so. “I will try to apply for permission again when the appropriate time comes. If it is not granted during this administration, I will do so in the next administration,” Kim told the JoongAng Ilbo on Friday.

Kim also was barred from publishing a book on the inside story of the inter-Korean summit in 2007 between Kim Jong-il and then-President Roh. The NIS said the book was “inappropriate.”