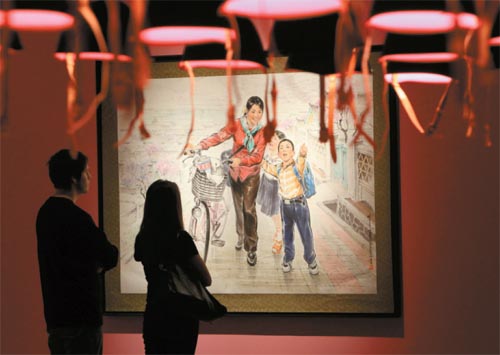 Visitors look at a North Korean painting at the Winzavod gallery in Moscow on Jan. 14. Moscow is currently hosting a major show of official art from the secretive state. [REUTERS]


MOSCOW - Chubby-cheeked, hard-working and joyous but also ready for military action is how North Korea presents its people at a major show of official art from the secretive state in Moscow.

“And Water Flows Beneath the Ice” exhibits 40 works by 39 state-commissioned artists that have never been shown abroad and span 25 years of tight North Korean rule.

Hardy women in overalls with windswept ponytails wade in rubber boots beside their male comrades in Pak Tong-chol’s “Pioneers of Taming the Western Sea,” from 2009. Sharing an innocent joke, the youths look happily ahead into the future.

Dozens of smiling steelworkers smelt and haul sheets of metal in a red flag-draped factory in Kim Su-dong’s “Front Workers of the Age of Songun,” also from 2009. They appear to be having the time of their lives.

All the art comes from Pyongyang’s Mansudae Art Studio, set up in 1959 and whose 1,000 artists are at the core of North Korea’s state-driven aesthetics. They designed the Pyongyang metro system and the capital’s socialist-realist statues.

But the curators of the Moscow exhibit - housed in the trendy Winzavod gallery, a revamped wine factory - insist it is not to be confused with propaganda.

“Pure propaganda is not art. We are hoping visitors will see this as a national art form,” co-curator Anna Zaitseva told Reuters at the pink-carpeted and red-lit exhibit, which runs until the end of January.

Folksy, embroidered scenes of healthy seaweed farm workers and hay gatherers from the 1990s are highly reminiscent of the socialist-realism used by the former Soviet Union as a political message to show the greatness of the state by applauding socialist triumphs.

Not all were convinced by the absence of politics at the exhibit, which does not feature North Korean leader Kim Jong-il.

“My first impression is that I am so happy we [Russians] survived this period,” said business manager Igor Splavnik, 47.

Standing by a painting of chubby newborns in a shining new hospital, Splavnik said Russia’s Soviet past was to blame for North Korea’s politics, which experts say has caused mass starvation.

“We should feed this nation,” he said.

North Korean art first entered the Western scene in 2007 with an exhibit in Italy, followed by one in Vienna last May.

Zaitseva, who has traveled to North Korea several times, said it is the artists’ technique - ‘Korean painting,’ a 2,000 year old practice of ink on paper - that is behind the exhibit’s beauty, making it separate from politics.

“The key technology to this art - and it is the founding, most representative part of it - is that North Korea uses Korean painting. This makes it differ from Soviet realism,” she said, adding that oil paintings did not enter the scene until the 1970s.

But behind the delicate ink strokes on parchment, there is a stark message of North Korea’s military readiness - a chilling reminder of current tensions on the Korean Peninsula, which are at their highest in years.

“Before a Fierce Battle,” from 2009, depicts two ferocious-looking soldiers surging forward toward a pile of gold bullets and handmade grenades while red smoke billows above.