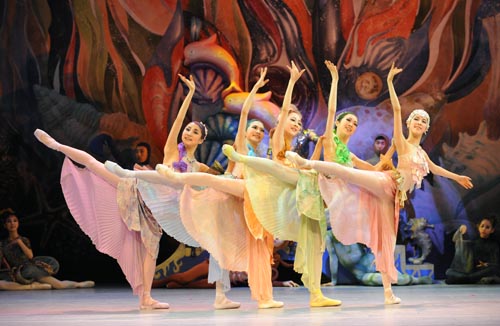 “The Song of the Mermaid,” which will be performed from Friday to Sunday at Seoul Arts Center’s Towol Theater, is celebrating its 10th anniversary this year and will feature ballerinas who previously performed in the leading role. See THEATER, below. Provided by the organizers

Thursday and Friday: Pianist Kim Gwang-min introduced Koreans to jazz, new age, classical and other genres of music as the host of the MBC program “Wednesday Arts Stage.” At this concert, he will present some of his favorite songs, including “Shadow of the Moon” with special guests Yoon Sang (“For You” from 1992) and Sung Si-kyung (“Like the First Time” from 2001).

Friday: This is the second concert in the orchestra’s Mahler series this year.

In this performance, the Seoul Philharmonic Orchestra will play Mahler’s Symphony No. 5 and Mozart’s Piano Concerto No. 20.

Friday and Saturday: Korean-Japanese pianist Yang Bang Eun, who is known as Ryu Kunihiko in Japan, has been a sensation since his 1996 debut album “The Gate of Dreams.” Since then, he has composed songs for films like “Thunderbolt” (1995) and “Yobi, The Five Tailed Fox” (2006), and the Japanese television drama “Melody” (1997).

He will play some of these songs at the concert, along with some of his greatest hits, including “Pan-o-rama.”

Saturday: Jazz pianist David Benoit returns for his third concert in Korea. Benoit, a five-time Grammy Award nominee, stayed at No. 1 on the Billboard Jazz chart for eight consecutive weeks in 1998 with his song “Waiting for Spring.”

At the concert, he will perform songs from his albums and the soundtrack of the movie “Here’s to You, Charlie Brown.”

“Don’t Wanna Try,” the first song from Frankie J’s debut solo album “What’s a Man to Do,” peaked at No. 19 on the Billboard Hot 100 chart in 2003. Later that same year he released his first Spanish-language album “Frankie J.” Since then, the singer has gone on to release four more albums - one Spanish and three English.

At the concert, he will perform hits like “Don’t Wanna Try,” “That Girl,” “Obsession” and “More than Words.” The set list is also likely to include his latest single “Crush,” which became a hit when it was released last year.

Saturday: This concert is part of KT Chamber Orchestra’s Saturday concert series, which is held every first and third Saturday of the month.

Yamagata made her debut with her song “Happenstance” in 2004 and was praised by Rolling Stone, Billboard and Blender. Hecker debuted with his first album “Infinite Love Song” in 2001. The concert will be conducted like a relay, with the two artists taking turns performing throughout the evening.

Jan. 28: Korea’s first generation of jazz musicians will perform together following their appearance last month in the documentary “Bravo! Jazz Life” by Nam Mu-sung. The film documents the musicians’ struggle to do what they love - play music. The movie culminates in a concert organized by a group of younger jazz musicians showcasing the talents of their elders.

Songs from the documentary will be performed at the Jan. 28 concert, including “Mo’better Blues,” “Whisper Not” and “Moonglow.”

THE SONG OF THE MERMAID

Friday to Sunday: “The Song of the Mermaid,” celebrating its 10th anniversary this year, was created by Kim Sun-hee, the founder of the Kim Sun-hee Ballet Company and a professor of dance at Korea National University of Arts.

This performance features all the ballerinas who previously performed in the leading role.

To Jan. 30: The legendary story of the three musketeers, Athos, Porthos and Aramis, returns to Korea, following sold-out houses the last time it was presented here.

Feb. 24 to 27: The Korea National Ballet presents the Paris Opera Ballet’s version of “Giselle” for the first time in Korea.

The ballet tells the story of a peasant girl named Giselle, who dies but comes back as a ghost to protect her lover, Albert, from a group of evil female spirits called the Wilis.

The ballet was first presented by the French company in 1841 and the choreography is based on the original work by French master Marius Petipa.

In this concert, they will play some of their songs on bamboo instruments. There will also be opportunities for the audience to try out the instruments on stage.

To Jan. 31: Pyeongchang is an alpine county and a haven for winter sports with an abundance of snowfall.

Throughout January, the county holds a festival of snow, ice and trout fishing on a 33,000-square-meter lot situated 700 meters above sea level.

To Feb. 6: Boseong, some 400 kilometers (250 miles) south of Seoul, is one of the major tea production areas in South Korea.

Festival installations include large Christmas trees, illuminations and a tunnel of light called the “Milky Way Tunnel of Love,” which was built along paths of green tea plantations to offer fantastic night views.