The few, the proud, the high-handed

The few, the proud, the high-handed 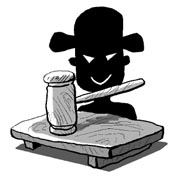 In the community of judges, the word “bunker” has a different meaning. Typically used to describe a sand trap in the game of golf, it has widely been used in Korea to refer to a chief judge reputed to be a hardheaded authoritarian boss. It alludes to a judge who insults lawyers in court by single-handedly dismissing their opinions.

Kim Doo-sik, a public prosecutor turned professor of law at Kyungpook National University Law School and the author of “The Immortal Sacred Family,” described a bunker using the words of a lawyer: “They are ignorant of the world and have a strong sense of being elite. They create the illusion that what they know is always right and try to apply their knowledge to all cases as if they are the Almighty. If the case does not match their knowledge, they scold the lawyers and abuse them.”

Judges act as the symbolic agents of Dike, the goddess of justice in Greek mythology. Dike holds a sword in her right hand and a scale in her left. The sword symbolizes the fairness of the law, while at the same time implying that a judge can be hurt by it if he or she misuses the power to punish others. The scale, on the other hand, means that a judge should listen carefully to two opposing views before handing down a verdict. In the Korean legal community, judges belong to the highest class. Whether one passes the state law exam or graduates from a law school, only a few people enjoy the privilege of being appointed as a judge.

The members of the Seoul Bar Association last year selected eight examples of inappropriate behavior by judges in court. They cited as the biggest problems high-handedness and the use of improper language, such as “You are the student, and I am your teacher” and “Do you have a hearing problem?” I can feel the pain of lawyers who can’t protest in the presence of these “imperial” judges.

In response, some judges have argued that they have their own style and that the public will ultimately be the one to suffer if judges sympathize with lawyers too much. Others say that lawyers are free to vent their anger if they lose a case.

Still, the court is not immune from cold-hearted judicial bureaucracy. Judges must rise above this, or they will be nothing more than judicial technicians. And the judges who enjoy their privileges too much should ponder the genuine significance of the sword and the scale.