[In-depth interview] Remembering the tensions of 1994

[In-depth interview] Remembering the tensions of 1994 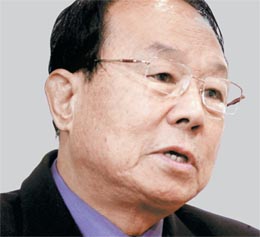 The plunge in inter-Korean relations in the wake of North Korea’s attacks last year remind many of 1994, when Pyongyang escalated tensions with the threat that it would turn Seoul into a “sea of fire.” That prompted the U.S. to review a plan to attack the North’s main nuclear facility in Yongbyon. The touch-and-go situation, however, was followed by an agreement to hold a summit between then-South Korean President Kim Young-sam and North Korean founder and leader Kim Il Sung in July 1994. The summit didn’t happen because of the death of Kim Il Sung.

Park Kwan-yong, 72, former National Assembly speaker, witnessed all those events first-hand. He served as chief presidential secretary for Kim Young-sam and is considered an expert on North Korean issues.

In an interview with the JoongAng Ilbo earlier this month, Park advised the current administration to be flexible in its North Korean policies and adapt to changes in circumstances.


Q. The inter-Korean relationship last year was tense following the sinking of the Cheonan and the shelling of Yeonpyeong Island. Why do these kinds of incidents happen so frequently?

A. North Korea is demanding that the Lee Myung-bak administration go back to the policies implemented over the previous 10 years (under the Kim Dae-jung and Roh Moo-hyun administrations). It is a warning to the Lee administration to choose either “peace” or “war.” The provocations have four or five purposes. For one thing, a provocation causes a divide within the South.

When you served as the chief presidential secretary for President Kim Young-sam, you ordered the Korean Central Intelligence Agency (predecessor of the National Intelligence Service) to make a manual to prepare for an emergency such as unification. Is that right?

After Kim Il Sung’s sudden death in July 1994, I had them bring existing documents dictating the government’s plans in such emergency situations and read it. I needed them to brief the president on a contingency plan. But they were useless. So I ordered them to draft a new manual.

Does the Lee administration keep an updated manual?

It was not touched over the past 10 years under the previous administrations. I heard it was touched up by the Lee administration. I don’t know how much (it has been altered.)

As the threat of provocations from North Korea remains, do we need to maintain the current policies vis-a-vis the North?

The ongoing third generation power succession in the North tells us that the country cannot accomplish reforms or open its economy and will stick to the “military-first” policy. Under these circumstances, the Denuclearization, Openness, 3,000 Initiative (the Lee administration’s policy to lure the North into denuclearization and openness by promising economic incentives that would increase the North’s Gross Domestic Product per capita to $3,000) sounds hardly realistic. The government needs new policies toward the North.

Does the current government need an inter-Korean summit?

Of course it does. Even countries battling one another hold talks with each other, don’t they? But the process should be based on established diplomatic customs. Rendering too much significance to a summit per se or promising too many benefits in return for having a summit should be avoided.

What was the motive behind the agreement between Kim Young-sam and Kim Il Sung for a summit in July 1994?

There was no such thing, but there was a lesson we can draw. In June 1994, the White House held a national security meeting to discuss a plan to attack North Korea’s nuclear facility in Yongbyon, but the Korean government was not aware of such important information.

The U.S. stationed an aircraft carrier off the east coast and prepared an attack. The Korean government discovered the information only after Chung Chong-wook, then national security adviser, got a tip that James Laney, then U.S. ambassador to Seoul, was going to hold a press conference to announce a plan to evacuate the families of U.S. soldiers stationed in Korea and other Americans in the country. President Kim, hearing it from Chung, delivered a stern message to the U.S., saying, “No war is allowed on the Korean Peninsula. I am the chief commander of 800,000 (South Korean) soldiers. I won’t mobilize a single Korean soldier.” President Clinton then backed down. At the time, former President Jimmy Carter went to Pyongyang and conveyed the mood and Kim Il Sung yielded, thinking, “They really would attack the nuclear facility at Yongbyon.” That’s why he said the North would accept inspectors from the International Atomic Energy Agency to come in and hold a summit (with the South).

North Korea wants direct talks with the U.S. And within the U.S. State Department, there are murmurs that some kind of momentum is needed to break the impasse in the North Korean nuclear issue.

The U.S. knew that the six-party talks were meaningless but has not come up with an alternative. Because North Korea knows this, it commits provocations. As far as the Korean Peninsula is concerned, the U.S., China and two Koreas all appear to stand at a crossroads. The U.S. thinks it is meaningless to talk with North Korea because it flip flops on its promises. China is actively taking North Korea’s side to prevent the country from collapsing during the succession process. Its strategy is to push the North to reform and openness and ensure that the country doesn’t starve.

The more China rises, the more important Korea appears to become to the U.S. Do you think so?

The (fallout from) the shelling of Yeonpyeong Island and the sinking of the Cheonan show that the Korean Peninsula, the key to the security of Northeast Asia, is going back to the time when continental forces versus marine forces and socialist countries versus democratic countries waged a cold war against one another. Henry Kissinger once said the human DNA never changes. We need to strengthen the South Korea-U.S. alliance, but at the same time we need to persuade China that a unified Korea is in its interest more than a divided Korea.