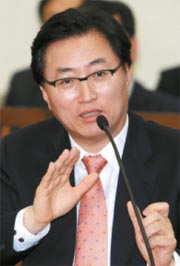 Knowledge Economy Minister-nominee Choi Joong-kyung was questioned on his ethics and professional competence at a confirmation hearing yesterday, and was grilled extensively on his wife’s real estate investments.

Prior to the hearing in the National Assembly’s Knowledge Economy Committee, Democratic Party floor leader Park Jie-won vowed to get to the bottom of allegations surrounding Choi’s family assets. “There are many doubts about his wealth,” Park said. “The investments were very complex, as if done by a professional real estate speculator.”

Choi, former vice finance minister and senior secretary to the president for economic affairs, was nominated by President Lee Myung-bak to the knowledge economy post on Dec. 31. Choi’s predecessor, Lee Jae-hoon, withdrew his nomination in August after his wife was accused in a confirmation hearing of having purchased a house in one of Seoul’s poorest neighborhoods based on insider information about the city’s urban redevelopment plans.

In the hearing, the Democrats said Choi had evaded inheritance taxes when his grandfather registered land in Hwaseong, Gyeonggi, under his name. Choi said the price was so low at the time of registration that it was not subject to inheritance taxes.

Choi was also questioned about his wife’s real estate deals. The Democrats claimed that lucrative investments were made based on Choi’s insider knowledge about development projects as a senior public servant.

In 1988, Choi’s wife and father-in-law purchased farmland inside a greenbelt zone in Daejeon. The land was developed into a road in July 2010, and the family received compensation that was 15 times the amount they had paid, the Democrats said. They also said Choi’s family broke the law by buying agricultural land even though they weren’t farmers.

Choi said the land was purchased for the retirement of his parents-in-law, denying the accusation of real estate speculation. He also said the purchaser did not have to farm the land under the law governing agricultural land, which was revised in 1996.

The Democrats also said Choi’s wife and sister-in-law purchased forestland in Cheongwon, North Chungcheong, in 1988, but the zoning was changed months later to allow construction of industrial facilities, boosting the value of the land.

Choi also denied giving away any inside information, saying the land was intended for a family graveyard.

He also said he was not involved in either deals, adding that he only learned about the investments in 1994 when he declared his assets as a senior public servant. At the time of the investments, he said, he was only a rank-and-file civil servant working until midnight every night, with no time to attend to family affairs.

Choi was also criticized for evading taxes when his wife filed an inaccurate registration of an office-apartment unit that understated its size. While saying that the unit was not a taxable property in 1994, Choi apologized and said he and his wife deeply regretted their “mistake.”

“The policy of an artificially weak Korean won and extraordinarily low interest rate was planned by you,” Representative Kim Jin-pyo of the DP said. “It only benefited the conglomerates’ exports, while putting small companies in pain and prompting hardships on people’s livelihoods.”

The Democrats also said Choi is a financial policy specialist and lacked expertise to guide the country’s industrial, commerce and energy sectors.

At the hearing, Choi vowed to do his best to facilitate harmony between small and big companies. “I will try to improve working conditions and do my best to stabilize prices,” he said.

The Knowledge Economy Committee will vote today to decide Choi’s fate. A vote by another committee will also take place tomorrow to decide the fate of Culture, Sports and Tourism Minister-nominee Choung Byoung-gug.