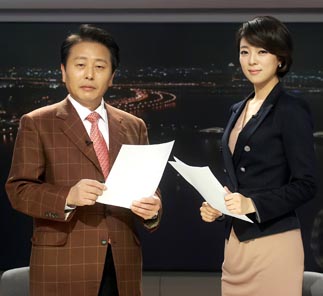 Choi Il-gu, left, and Bae Hyun-jin appear in this undated publicity photo for MBC. Choi, who is famous for his critical commentary of government policies and politicians, has veered away from the stoic delivery of most television news anchors and taken a more casual approach. His efforts are part of a broader attempt by news-program producers to boost their ratings in the face of an increasingly competitive environment and lack of interest in television news. Provided by MBC

News anchors in Korea are infamous for their rigid facial expressions, regardless of whether they are delivering tragic news or introducing a human interest story. But with growing competition in television news, networks are encouraging anchors to loosen up their delivery in the face of falling ratings and lack of interest in television news.

MBC is at the forefront of change. It’s been about two months since the network shifted its primetime weekend news program from 9 p.m. to 8 p.m. - the first time in the show’s 41-year history that the show, which airs Saturday and Sunday, changed time slots.

MBC said in a statement in November that it is hoping to recapture its audience share, which has been declining for the last 10 years. Ratings for MBC’s news program were between 30 and 40 percent in the early 1990s, peaking at 45.5 percent in 1991. But by last October, they had dropped to around 6 percent.

The other notable change at MBC is anchor Choi Il-gu’s delivery. The 51-year-old veteran, who gained a following from 2003 to 2005 for his critical closing commentaries on government policies and politicians, has spiced things up a bit with a more casual tone.

Choi has dropped the emotionless style that was once popular on Korean news programs and talks almost as if he’s interacting with a neighbor. Choi sounded excited during Sunday’s show, when he told viewers, “I met IU yesterday,” just before offering commentary on the teenage singer’s popularity. The statement was remarkable because most anchors wouldn’t dare to make such a personal statement.

But these days, Choi regularly makes jokes during the program. In introducing an interview with comedian-turned-director Shim Hyung-rae, who plays Young-gu, a bumbling idiot in the new film “The Last Godfather,” Choi went so far as to imitate Young-gu.

Viewer reaction to Choi’s new style has been mixed. Some love it and others want him to return to his old self.

“I hardly watch the news, but you’ve made me an ardent fan of your news program,” a viewer with the ID annaq123 wrote on the program’s Web site.

Another viewer writing as GLEN7K said he wants Choi to be more dignified.

“Anchors are not comedians,” GLEN7K wrote. “News has to be more professional.”

Most Korean anchors are trained to deliver the news in a neutral manner that can come off as stiff or stoic, according to Lee Kyu-won, the head of KBS’s announcer department.

“We were trained that way because we have to be objective,” she said. “And we weren’t allowed to offer commentary. But these days the format is softer, and anchors are allowed to express themselves.”

Won Yong-jin, professor of journalism at Sogang University, said, “There are no written rules for anchors. It’s easy to find anchors from overseas who are known for their critical commentary, but that was uncommon here. Now, Korean news shows now trying various tactics to revive their lost credibility and popularity.”

Aside from MBC, other broadcasters are experimenting with different formats for their news programs.

Unlike most news programs that have a male and female anchor, the 8 p.m. news program on the government-run KBS2 had two female hosts from November 2008 to May 2010. According to a representative from the station, it was popular with women but men in their 40s and 50s didn’t like it.

And KBS2’s morning news program, which airs every day at 8 a.m., is one of the first television news programs to offer entertainment news.

“When we launched the news program back in 2007, we decided to offer entertainment news because the majority of viewers at that hour are housewives in their 30s, 40s and 50s who are interested in the nation’s entertainment scene,” said Jeong Young-hun, a KBS official.

The clothing and hairstyles of news anchors have also changed, especially for women. In 80s and 90s, most female anchors had bobbed hair and wore drab suits in black, white or gray. These days, however, female anchors have diverse hair styles - from medium-length cuts and buns to long wavy locks - and their suits are more colorful.

Despite the networks’ efforts to attract attention with a casual, lighter style, viewers seemingly need more time to adjust. According to TNS Media Korea, which analyzes television audience ratings, KBS News 9 - a typical news show - had the highest ratings for any news program. It had an audience share of 18 percent, topping the other two news programs on Sunday evening. The other primetime news programs from MBC and SBS earned an audience share of 10.7 and 11.6 percent, respectively.