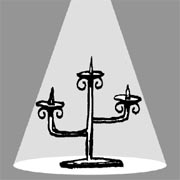 In the early years of the Joseon Dynasty, the word “butcher” was essentially synonymous with the word “thief.”

One text from the time said that “stealing and robbery are mostly committed by butchers” and that “most butchers are thieves.” Therefore, whenever a theft or robbery occurred, butchers were the prime suspects. And with good reason. Policies introduced at the time forced many butchers out of business, leaving these low-skilled - and even reviled - workers with few other employment options. Some had no choice but to steal and commit other crimes to support themselves and their families.

Throughout the ages, there are countless examples of people turning to crime in an atmosphere of high unemployment and poverty. The classic movie “King Kong” vividly depicts the dreary scenes common during the Great Depression. The streets are overflowing with the unemployed, and everyday people are committing crimes just to stay alive, as the heroine of the film does when she unsuccessfully tries to steal an apple from a stall.

It’s a pity to hear that in our society, crimes committed in the name of survival are on the rise, with a notable increase in stealing. Coveted items include everything from electric wire and manhole lids to construction materials, ramen, milk and clothes. This isn’t supposed to happen in the age of $20,000 per capita income.

But the solution is not to simply tell these people that they shouldn’t commit crimes, even if they are in extremely difficult situations. As the proverb goes, “Anyone will climb over the wall of someone else’s home if left to starve for three days.” Indeed, Jean Valjean - the protagonist in “Les Miserables” - attempted to steal silver candlesticks from a bishop who helped him, even after serving a 19-year prison term for stealing a loaf of bread.

The Ministry of Justice has introduced lenient policies on these types of crimes, but it will only lead to more criminal activity in the future. It is much better for us to reduce the number of poor people and take preventive measures, such as providing a financial safety net.

There are reports out there that a serious food shortage in North Korea has led to an increase in crimes in that nation. If we don’t do anything here at home, people may start asking, “What difference is there between the North and South?”