A respectful farewell for animals culled for FMD

A respectful farewell for animals culled for FMD 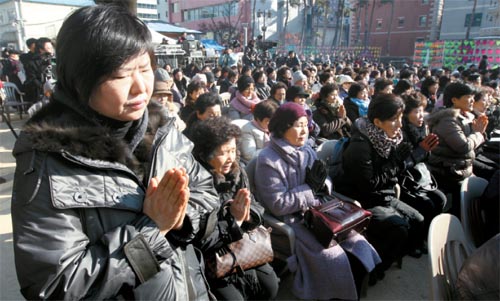 About 1,000 Buddhists attend a prayer session yesterday at the Jogye Temple in central Seoul to pray that the souls of the animals culled during the government’s effort to fight the spread of foot-and-mouth disease rest in peace. They also prayed for the end of the outbreaks around the nation. As of yesterday, the number of FMD outbreaks officially tallied by the government was 124. About 2.16 million cattle, pigs, goats and deer have been culled since the first outbreak was confirmed on Nov. 29, and all livestock in the country will be inoculated by the end of this month. [YONHAP]