In ‘The Yellow Sea,’ the brutality of the chase is visceral

In ‘The Yellow Sea,’ the brutality of the chase is visceral 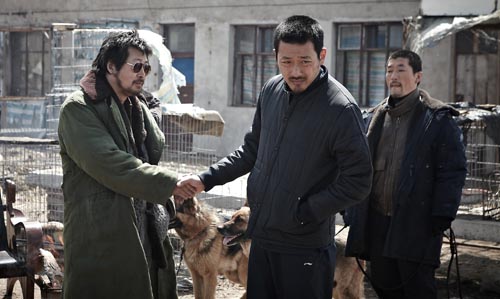 As with his critically acclaimed film “The Chaser” (2008), “The Yellow Sea” is a well-crafted thriller in the style of classic, noir films. “The Yellow Sea” is stripped of computer graphics and highly choreographed fight scenes found in many other thrillers these days.

The characters use almost primitive tools - axes and knives - for murder in this film, and the only noticeable color in the film’s bleak, almost black-and-white shots are splashes of red when blood is spilled.

With such a raw, no-frills approach to action, the audience is allowed the time and realistic sense of space to feel the actual weight of the brutality and the chase.

The film is pure drama, and none of the characters kill for the sake of killing. Rather, their acts of violence and murder are their only means of survival and also give them their identity.

The story follows Gu-nam (Ha Jeong-woo), an ethnic Korean living in Yanbian, northeastern China, who tries to gamble his way out of debt.

But after his attempts to earn money prove fruitless, he accepts an offer from broker Myeon Jeong-hak (Kim Yun-seok) to go to Korea and kill a man in exchange for having his debt paid off. While in Korea, Gu-nam also seeks to find his wife, who went there to earn money and never came back.

Gu-nam has 10 days to kill the man and get back to China. But when a group of men kill the target first, everything turns upside down. Gu-nam ends up being accused of murder by the police and is now also chased by the people who actually killed the man. The camera follows Gu-nam’s hopeless escape as he goes from Yanbian to Seoul and Busan, almost as if it were a sinister witness.

Na has taken out all of the somewhat “commercial” elements that made “The Chaser” a bit more palatable to audiences.

In place of the partially humorous dialogue and somewhat three-dimensional characters that managed to dilute the impact of the violence in “The Chaser,” the characters in “The Yellow Sea” come off as soul-less slivers of a hopelessly bleak society. It’s quite difficult to empathize with any of them.

However, by taking the focus away from the characters, Na manages to use them as props to draw a compelling, visual picture. In the process, he proves his capabilities as an elegant cinematographer.