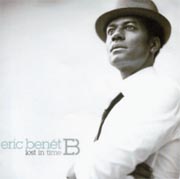 It seems like everything’s going retro these days - the fashion, the dance moves, and of course, the music. The same could be said of R&B and soul singer Eric Benet. Even the title of his new album, “Lost In Time,” feels like a blast from the past, or at least an attempt to look back to the past before the year gets underway.

Anyone who has enjoyed Benet’s soft and soulful voice will appreciate this album. It’s quintessential R&B. He sings of a lost love, yearns for a potential one and makes the listener want a hot cup of coffee.

If you’re not a fan of Benet, the album may come off as a little dull or sound like a rehashing of what he’s done before.

“Hurricane” contained melancholic music that played up his soulful voice, reflecting the breakup of his marriage to actress Halle Berry. “Love & Life” was a bit more lively with hits such as “Chocolate Legs.”

This time, Benet diversifies his music even more with upbeat songs influenced by Motown and disco, especially in the songs “Paid” and “Good Life,” both of which really lift up the whole album.