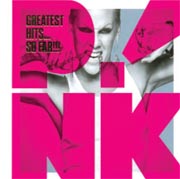 The title of Pink’s latest album expresses her personality and style the best - “Greatest Hits... So Far!!!” The confidence and the blatant wit in the name is fitting for an artist with so much flair.

As you may have guessed, the album is a collection of Pink’s past hits. On it, the artist also serves as executive producer, which shows in the very personalized selection of the tracks. Still, fans of the singer may notice that many of their favorite songs seems to be missing from this compilation, including “Most Girls” from the first album and “Nobody Knows” from album three.

That may be a disappointment to some, but after going through the CD, it is clear that Pink really put a lot of thought into selecting the songs. She takes you on a musical journey that allows you to get a feel for her music philosophy, her development as an artist and the various styles and creativity that she never fails to demonstrate over and over again.

With megahits such as “So What” and “Stupid Girls,” this rocker chick shows once again why she has been so popular through the years. She never disappoints her female listeners with a half-baked, tough girl act, but generates excitement. As always, Pink brings power back to the ladies but does so tastefully with her music.