One solution to our food crisis: Creepy crawlies

One solution to our food crisis: Creepy crawlies 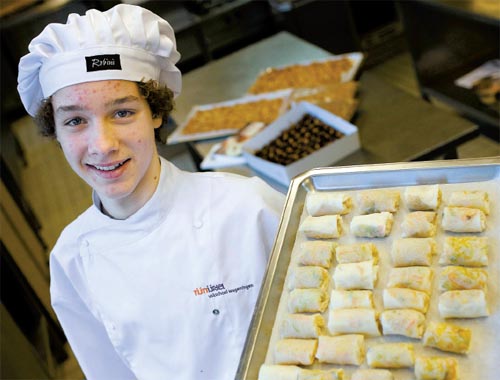 Max Kipp, a student at the Rijn IJssel school for chefs in the Netherlands, displays a tray of springrolls filled with grasshoppers on Jan. 12. [REUTERS]


All you need to do to save the rainforest, improve your diet, better your health, cut global carbon emissions and slash your food budget is eat bugs.

The professor at Wageningen University in the Netherlands said insects have more protein than cattle per bite, cost less to raise, consume less water and don’t have much of a carbon footprint. He even has plans for a cookbook to make bug food a more appetizing prospect for mature palates.

“Children don’t have a problem with eating insects, but adults with developed eating habits do, and only tasting and experience can make them change their minds,” Van Huis said.

“The problem is psychological.” Van Huis has organized lectures, food tastings, and cooking classes with a master chef who demonstrates how to prepare a range of recipes using bugs, worms and grasshoppers, all bred or raised at a Dutch insect farm for consumption.

To attract more insect-eaters, Van Huis and his team of scientists at Wageningen have worked with a local cooking school to produce a cookbook and suitable recipes.

Chef Henk van Gurp, who created recipes for mealworm quiche and chocolate pralines with buffalo worms, sees no reason to disguise the ingredients, and sprinkles mealworms on top of the quiche filling and onto the chocolate buffalo worms as protein.

“I try to make my food in a way that people can see what they eat,” he told Reuters. “Once international leading chefs begin preparing this food, others will follow.”

Van Huis says Europeans should consider insects an alternative source of protein because they can contain up to 90 percent protein, compared with 40-70 percent for beef.

“Meat consumption is expected to double from 2000 to 2050. We are already using 70 percent of our agricultural land for livestock and we cannot afford to spare more,” he said.

Plus raising cattle is responsible for 18 percent of greenhouse gases emissions.

Insects are already bred as food for birds, lizards and monkeys at the Callis family’s farm near the university, and now the owners see a chance to sell bugs for human consumption. “It is good food, of high nutritional value, and very healthy for elderly people,” said Margot Callis, though she cannot eat insects herself because she is allergic to them.

Duyugu Tatar, a 24-year-old IT consultant, was less effusive about the mealworm quiche.

“The taste was not that awful, but the idea of eating them horrified me. It was crispy. The taste was not like normal food. Not like meat, vegetable or fruit. Maybe something like cornflakes,” she said.