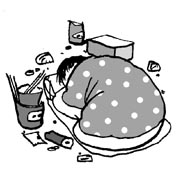 These days, a person who has an obsessive interest in a television drama is called a dejected person.

A typical example is a person who was hooked on “Secret Garden,” a popular TV drama that ended last week. Sometimes, they attach the suffix “ari,” which implies a form of illness. It may originate from a situation where a person falls ill because he is infatuated with the heroine of a drama. Named after the main figures in the story they are hooked on, such infatuations are called Joo-won-ari or Ra-im-ari.

Japan has a similar expression for such a person: Otaku is someone who shuts oneself inside and is immersed in something. They are an expert in a particular field, but excessive interest in one subject makes them maniacs. It is a demonstration of social disorganization.

While Korean-style dejection is a group phenomenon, otaku can be understood as an individual concept because they close themselves off from the outside world.

Group obsession that results in social dejection and psychological ailment has deep roots in this part of the world.

According to a chapter on the eastern states of China in the Records of the Three Kingdoms - an authoritative Chinese historical text for the period 189-280 A.D. - people gathered at the centre of the country, drank alcoholic beverages and enjoyed themselves by singing and dancing for days and nights on end during a harvest ceremony in the Buyeo kingdom called yeonggo.

Perhaps the soccer mania that swept through the country during the 2002 World Cup originated from the DNA we inherited from our Buyeo kingdom ancestors. Even if the resentments had piled up, they all melted away as if snow melted in the spring.

It had a hand in “The Miracle on the Han” and was evident in the famous “gold-collection campaign” during the Asian Financial Crisis in 1997.

But it also has the danger of misleading people to dejection.

The rampaging populist proposals in politics also rely on such group distortion.