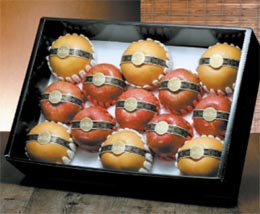 The Achimmaru gift set offered by Nonghyup. Provided by the company

With the Lunar New Year holiday just around the corner, Nonghyup is offering one-of-a-kind gift sets featuring some of the company’s top products.

Those in search of inexpensive - yet high-quality - gifts can choose from a variety of pre-packaged sets including ones with Mokuchon ham, Arumchan products, Korean beef or fruit. Prices for these sets range from 10,000 won to 500,000 won. There are six different Arumchan gift sets, featuring everything from kimchi, sesame oil and perilla oil to gochujang, mushrooms and dried persimmon. Prices range from 20,000 won to 50,000 won for the sets with kimchi, sesame oil and perilla oil, while the mushroom sets cost anywhere from 40,000 won to 100,000 won and the dried persimmon gift boxes run 40,000 won to 120,000 won.

If you want to give your loved ones or friends some fruit this year, the Achimmaru and Tteranae sets are a great choice. Each gift option contains an array of hand-selected fruit that is delicious but won’t break your budget. Gift sets with apples will set you back between 40,000 won and 60,000 won, or you can get ones with pears for between 30,000 won to 40,000 won. A mix of both costs 50,000 won to 60,000 won. Additionally, you can order a gift set with tangerines for between 20,000 won and 30,000 won.

On the upper end of the quality scale, Nonghyup has put together gift sets with red ginseng and Ansim Hanwu sets with top-notch Korean beef. The Hansamin sets feature Nonghyup’s own red ginseng products and are ideal for seniors who are keeping a close eye on their health and younger people who want to boost their immune systems. These gift sets range from 40,000 won to 500,000 won. The Ansim Hanwu set offers a wide range of options - including sirloin steak, ribs and oxtail - for between 100,000 won and 500,000 won.

If you are unsure what to get, try the Nongchon Sarang Gift Voucher, which can be easily used at 2,000 Nonghyup stores and branches. The company is offering vouchers in six amounts, from 5,000 won to 500,000 won.