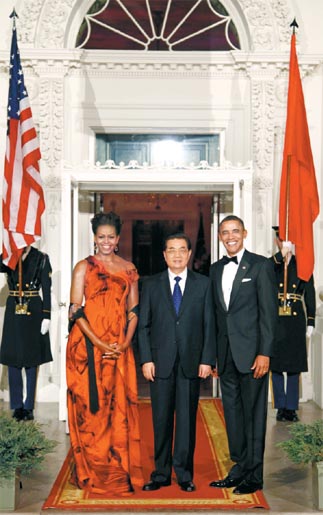 Obama also told reporters that he and Hu agreed that North Korea must “avoid” further attacks on South Korea, although Hu didn’t mention the topic in a joint press conference following their hourlong meeting on Wednesday afternoon, Washington time.

In yesterday’s joint statement, Obama and Hu expressed concern over the “DPRK’s claimed uranium enrichment program,” which is the first time China has openly mentioned the program. Hu didn’t mention the North’s nuclear program during the press conference.

The presidents also found common ground over “heightened tensions on the Peninsula triggered by recent developments,” and they emphasized “the importance of an improvement in North-South relations.”

The two agreed that “sincere and constructive inter-Korean dialogue” is an essential step in thawing relations between the two Koreas, which could possibly lead to a resumption of six-party talks on stopping the North’s nuclear program permanently.

North Korea showed a visiting U.S. scientist last November a facility that it claimed was enriching uranium. Since then, U.S. officials have been underscoring the threat from the North’s nuclear weapons and missiles.

“[North] Korea’s nuclear and ballistic missile program is increasingly a direct threat to the security of the United States and our allies,” Obama said yesterday alongside Hu. “The paramount goal must be complete denuclearization of the peninsula.

“I told President Hu that we appreciated China’s role in reducing tensions on the Korean Peninsula,” he said, “and we agreed that North Korea must avoid further provocations.”

Hu spoke after Obama at the press conference. It was his first Q&A with the international press since 2005.

“China and the United States will enhance coordination and cooperation and work with the relevant parties to maintain peace and stability on the peninsula, promote denuclearization of the peninsula, and achieve lasting peace and security in Northeast Asia,” Hu said, maintaining a grim expression throughout. He did not mention North Korea directly in his statement.

The U.S. has been urging China to take a more active role in reining in North Korea after the attack on South Korea’s Yeonpyeong Island last November, as Beijing is the isolated North’s most important ally. Several high-ranking U.S. officials visited China in the weeks before Hu’s visit to Washington to reiterate the message.

Some analysts said that China’s stance toward North Korea has not necessarily changed, despite the friendly tone between Obama and Hu at the summit.

“The two countries still have some negotiating to do, as it’s difficult to say that the joint statement was issued after complete agreements from both parties,” said Professor Kim Yong-hyun, an expert on North Korea at Seoul’s Dongguk University.

“It’s still unclear where things will take off from here [regarding North Korea],” a government source said.

The South Korean government reacted positively to the news from Washington, but said its position hasn’t changed.

“There will be no change in the South Korean government’s stance regarding its North Korean policies or the currently existing request that we have made,” said an official from the Ministry of Unification yesterday following the joint statement and press conference.

“The government agrees that improvement in South-North relations and peace on the Korean Peninsula are important, and that constructive talks are needed to yield such results,” the official added.

South Korea requested talks with the North to discuss Pyongyang’s attacks on South Korea last year and steps toward denuclearization on Jan. 11. The South’s Minister of Foreign Affairs and Trade said yesterday that a high-ranking U.S. official will visit South Korea after Hu’s visit to the U.S.