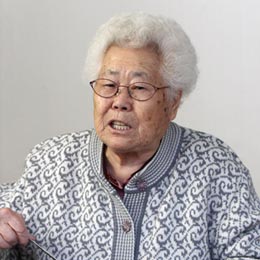 Lee Ok-sun, 84, turns over a pile of cards in her hands as she reads the words of one, which says: “Halmoni, Saranghaeyo [Grandmother, I love you]. Happy New Year.”

With the last three words in English and the rest scrawled in Korean, the short but heartfelt message is one of many Lee has received from people in the United States and Canada.

“This young woman is a history teacher. She sends me cards every year to thank me, saying she understands and teaches history better since she listened to my lecture,” said Lee, who has a special story to tell. She is one of the few remaining “comfort women” of Korea, who were drafted by the Japanese military as sex slaves during the Japanese invasion of the Korean Peninsula in World War II. Lee now lives in a group home for former comfort women in Gwangju, Gyeonggi.

Lee was just 15 when she was kidnapped by Japanese soldiers in Ulsan. She had just come outside to go on an errand when she was taken. Along with other young girls who were snatched by the Japanese military, Lee was sent to China and spent three years as a comfort woman in the Japanese barracks. According to Lee, on holidays as many as 50 soldiers would be lined up outside her door.

Because of the severe beatings from the soldiers, Lee’s hearing and vision were greatly impaired, so much so that she “came back mutilated.”

In 1996, Lee made the decision to go public with her story.

“We call it ‘hanging up the comfort woman sign,’” Lee said.

Lee began traveling through numerous countries — including the U.S., China, Japan, Canada and the Philippines — to tell the truth about the comfort women.

“I had no choice but to speak, when [they] were pleading for me to tell them about the history,” said Lee, surrounded by countless pictures of herself with foreign students in her room at the women’s center.

Now the lectures are fond memories because Lee is ailing, as nearly all of the last few comfort women are.

“My heart is bad. My kidneys are bad, too. I should receive an apology [from Japan] before I die,” said Lee, who also suffers from angina. She had heart surgery last year and says she is worried she is running out of time.

As of early 2010, there were 88 former comfort women registered by the Korean government.

But in just a year, their numbers have dwindled to 76. Nine women passed away last year and three others passed away on Jan. 13.

“There are still so many people in our country who don’t know about the comfort women issue. I put on the ‘comfort woman sign’ to let them know...” she trailed off.

Lee was at a loss for words when she was informed that history would become an elective course for Korean high school students this year.

“It is time for us old grandmothers to die. Young people should know the history and help. Our purity was taken away from us and trampled on at fifteen. But [the Japanese] are saying that they didn’t do it,” said Lee. “Our daughters shouldn’t have to go through the same thing because they don’t know the history.”